THE MADNESS OF CHANCELLOR GEORGE!
Idiotic Osborne has invited the Chinese Communists to build and own a nuclear power station in England (L.A.M.F.)
Why is this?  If the conservative economic policy of 'free-market' capitalism is genuinely reinvigorating Britain, then why are the Bullingdon boys grovelling to the Chinese Communists for some cash?  Why are they jeopardizing our National Security, our health, our wealth and autonomy?
A decent government would place an embargo on all trade with China until they get out of Tibet and introduce basic Human Rights to their citizens.
Giving the Chinese authorities a free hand to control nuclear power in Britain is surrendering our own sovereignty and courting disaster.  This is a treacherous betrayal of our safety and integrity. 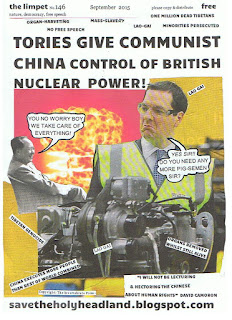 and they deal in the sperm of pigs.....
Posted by Save the Holy Headland at 06:11 No comments:

STAND BY YOUR MAN...
Latest developments in the 'Did David Camoron Have Oral-Sex With Severed Pig's Head'-story. After the nation was 'amused' to hear of the extraordinary allegations of prime ministerial pig-sex, I contacted my local tory-reactionary member of parliament, Derek Thomas, to test his position on the matter:  (I've just had a thought - what if it was a boar?  That would make it gay-dead-mutilated-pig-oral-sex!  Surely no worse than straight-dead-mutilated-pig-oral-sex, don't get me wrong!)  but it does add a spicy twist to an otherwise mundane and unexciting story... 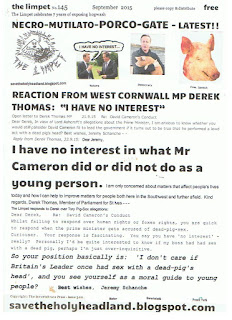 Dear Jeremy
I have no interest in what Mr Cameron did or did not do as a young person.
I am only concerned about matters that affect people's lives today and how I can help to improve matters for people both here in the Southwest and further afield.
Kind regards
Derek Thomas

Member of Parliament for St Ives

Re:  mp's responsibility to represent the People
Dear Derek,
As you know, you have not yet responded to several letters and emails from me concerning such topics as Human Rights, Fox-hunting, the legal basis for Cameron's killing of a British Citizen, legality of military intervention in foreign states, etc..
If I do not receive answers to these queries soon, I will be forced to conclude that you are willfully neglecting the duties for which we pay you.  This would leave me in a disenfranchised state and would constitute a failure of democracy.  Not a good reflection on party or member.  And talking of members...
Re:  David Cameron's Conduct
Whilst failing to respond over human rights or foxes rights, you are quick to respond when the prime minister gets accused of dead-pig-sex. Curiouser.  Your response is fascinating.  You say you have 'no interest' - really?  Personally I'd be quite interested to know if my boss had had sex with a dead pig, perhaps I'm just over-inquisitive.
So your position basically is:  'I don't care if Britain's Leader once had sex with a dead-pig's head', and you see yourself as a moral guide to young people?
Best wishes,  Jeremy Schanche

You are what you eat.
Posted by Save the Holy Headland at 13:50 No comments:

Boss of Konsel Kernow questioned over legality of Treloyhan Wildlife Corridor planning permission - Latest -   The application to build luxury-housing on a designated wildlife corridor was based on false information - the planning   officer Roger Harding, who approved the application, would not affirm its legality and neither would the council's lawyer!  With the High Court Hearing getting close, the corrupt officials are hunkering down in their bunkers, waiting and hoping for the lens of public scrutiny to go away...  Due to the disappointing reaction of councilor Harding and council-lawyer Ben Curnow, The Limpet decided to take it to the top and ask the big boss to give the public a guarantee that proper procedure had been followed.

No such assurance has been received.

Dear Mr Pollard,
Re:   Responsibility to the People of Kernow
I  wrote to you in early June concerning the questionable legality of the Treloyhan Wildlife Corridor planning application.  I had no response whatsoever from you.
To repeat my query:  I wanted to know whether you, as boss of Cornwall Council, would affirm to the people of Cornwall that the planning process for Treloyhan woods has been conducted in accordance with law.  Since Roger Harding, Chairman of Planning, will not take such an oath, and neither will Ben Curnow, 'our' Council's legal representative; presumably the responsibility devolves upon yourself as leader.
Do you think the council leader should be able to affirm that his council has acted lawfully?  I do.
If you will not swear that the law has been upheld, will you:
(A) start an immediate investigation into corruption in Cornwall Council?  or
(B)  Resign?
Cornwall looks forward to your response.
With best wishes, Jeremy Schanche

Thank you for your email dated 4 September regarding
the Treloyhan Wildlife Corridor planning application.

Cllr Pollard is looking into the issues you have raised and
will respond fully in due course.  In the meantime, if you
have any further enquiries please do not hesitate to
contact this office.

Thank you for your email dated 4 September
regarding the Treloyhan Wildlife Corridor
planning application.

I have passed your further concerns to the
Planning & Regeneration Section to be
considered with your previous correspondence.

Sep 8
Public message to - John Pollard, Leader, Cornwall Council:
Re:  Responsibility
Let the record show that John Pollard,
leader of Cornwall Council is NOT
prepared to affirm the legality of the
planning application to construct luxury
housing on Treloyhan Wildlife Corridor.
No further questions me lud.
Best wishes,  Jeremy Schanche 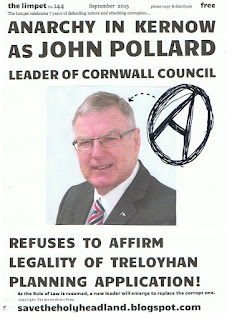 Posted by Save the Holy Headland at 16:57 No comments:

ARE TORIES FUCKING A DEAD PIG?
Well, they say that 'a week is a long time in politics' and the last nine days will be remembered for two utterly extraordinary events.   On Saturday 12th September the Labour Party elected Jeremy Corbyn, a Socialist, as Leader of the Labour Party, with a bigger majority than even blair got.  Unbelievable!  The entrenched British right is out to get Corbyn and he has been criticized for not singing God Save The Queen (he is a Republican - so why would he?)
Funnily enough, with all the media-frenzy trying to make Jeremy Corbyn look like the Anti-christ, the second thunderbolt has exploded in the blue sky of British Politics - on 21st September the story emerged that the Prime Minister, David Camoron, has been caught fucking a dead pig.  Well, not exactly, but near enough for concern....  The allegations were made by 'lord' Ashcroft, a multi-millionaire who had poured millions of pounds into the right-wing Conservative Party of Britain.  It seems Ashcroft had been hoping for a top government job and had been let down by his product.  Enraged that his protege had reneged on him, the 'lord' published his porky tale of bestial perversion, drunkeness, cocaine, ganja, Supertramp (ughh!) and vile depraved 'dinners', at one of which he alleges that Camoron inserted his 'genitals' into the mouth of a dead pig during a 'ritual'. (sic)
And people think Corbyn's got an image-problem!
Welcome to the wacky world of British politics. 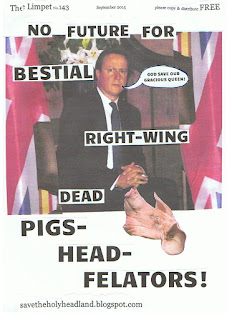 I thought I'd contact my representative in the British democracy, Derek Thomas, to see how - and if - he responds to the curious allegations.  I sent the following email:

In view of Lord Ashcroft's allegations about the Prime Minister, I am anxious to know whether you would still consider David Cameron fit to lead the government if it turns out to be true that he performed a lewd act with a dead pig's head?

It seems the leaders of the Lib Dem and Labour
parties are both vegetarians...
Posted by Save the Holy Headland at 08:08 No comments: