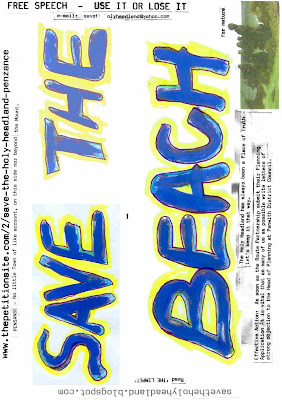 "there is but a chapel in the sayd towne, as ys in Newlyn, for thyr paroches chyrches be more than a myle of." Leland, on Pensants, 1540. 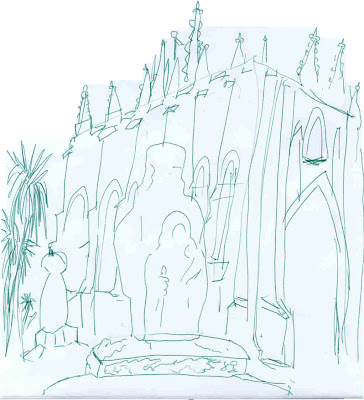 Three quarters of the world population of Halichoerus Grypus, the Grey Seal, lives in the waters around Britain and Ireland. These animals can measure up to 3 metres in length and live on a diet of crustaceans, cephalopods such as squid and octopus; and various types of fish and eels. The seal has an amazing ability to store oxygen in its blood and muscles. When it dives, its heartrate falls from 150 to 10 beats per minute, allowing submersion of up to 20 minutes. Seals are pinnipeds, from the Latin for fin-footed. Sandy Cove has always been seal territory. 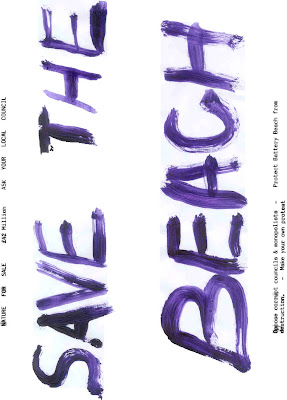 This is the poster that was made and displayed on 7th September '08 following Mr Cartwright's "White Elephant" letter to The Cornishman of 4th September '08, breaking the story of the beach that was threatened with the 'the curse of the car-park.' Mr Cartwright, who for many years ran the Isles of Scilly Steamship Company and now runs Trythall Shipping, has put forth a plan that rather than being designed to attract a large pot of public money, sets out an eminently practical, efficient and economically viable scheme that does not demand the destruction of wild habitat. Rather than promoting an uneconomic leviathan of a vessel, his plan will utilize a rapid, stable and graceful catamaran. This would attract admiration by the combination of practicality and elegance that we see manifested in imaginative ventures like the Eden Project. To see Mr Cartwright's plans, go to

Whether or not good sense and economy will prevail over the goldfeverish fundinglust of the RP is all too moot a point. It seems an unfortunate fact that where, as in West Penwith, poverty is identified and funding allocated, the money becomes an end in itself regardless of what it is being used to fund. Another example of this is the (our italics) "Natural" England/National Trust/Heath Project scheme to enclose and graze Penwith Moors. At a forum held to discuss the (already begun) fencing work on 27th November, 53 voters opposed the scheme, with 10 voting in favour. Of the latter, one was a local farmer, two were fencing contractors, and five were employees of the NT/NE/Cornwall County Council. Take a look at

And now, after working hard in Security Trade,
He's got it made,
The shops that need aid are the ones that haven't paid...


STOP PRESS!!!
MOVE OVER New York Times; RUN FOR COVER Die Welt; muffin quite like this has ever been seen on Fleet Street. Let's raise a toast to a hot new journal, sister publication to The Limpet... It's..... 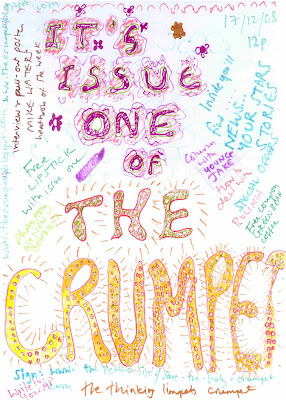 Posted by Save the Holy Headland at 10:49 No comments: 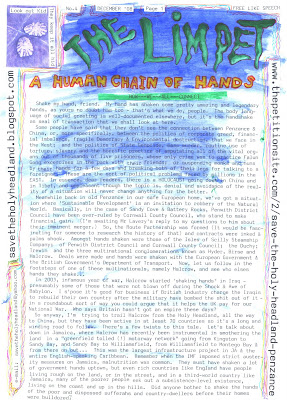 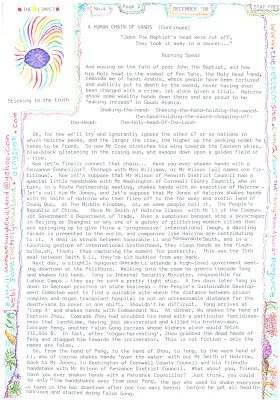 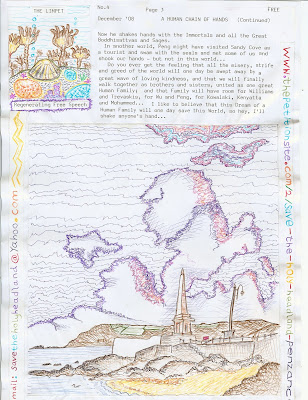 Posted by Save the Holy Headland at 08:06 No comments: