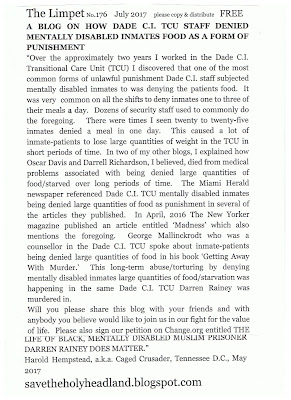 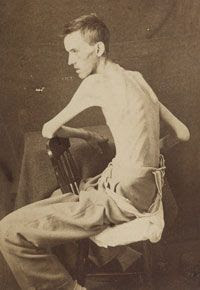 "Over the approximately two years I worked in the Dade C.I. Transitional Care Unit (TCU) I discovered that one of the most common forms of unlawful punishment Dade C.I. staff subjected mentally disabled inmates to was denying the patients food.  It was very  common on all the shifts to deny inmates one to three of their meals a day.  Dozens of security staff used to commonly do the foregoing.   There were times I seen twenty to twenty-five inmates denied a meal in one day.  This caused a lot of inmate-patients to lose large quantities of weight in the TCU in short periods of time.  In two of my other blogs, I explained how Oscar Davis and Darrell Richardson, I believed, died from medical problems associated with being denied large quantities of food/starved over long periods of time.  The Miami Herald newspaper referenced Dade C.I. TCU mentally disabled inmates being denied large quantities of food as punishment in several of the articles they published.  In April, 2016 The New Yorker magazine published an article entitled ‘Madness’ which also mentions the foregoing.  George Mallinckrodt who was a counsellor in the Dade C.I. TCU spoke about inmate-patients being denied large quantities of food in his book ‘Getting Away With Murder.’  This long-term abuse/torturing by denying mentally disabled inmates large quantities of food/starvation was happening in the same Dade C.I. TCU Darren Rainey was murdered in.
Will you please share this blog with your friends and with anybody you believe would like to join us in our fight for the value of life.  Please also sign our petition on Change.org entitled THE LIFE OF BLACK, MENTALLY DISABLED MUSLIM PRISONER DARREN RAINEY DOES MATTER."