"On 3/17/17 I was ghosted out of the Florida Department of Corrections (FDC) and Involuntary Interstate Compacted to the Tennessee Department of Corrections (TDOC) with none of my law work or property I had in FDC.  Since my 3/17/17 arrival to TDOC, I haven’t had any access to Florida law.  In this blog, I’m going to from memory attempt to address three Florida statutes that concern the FDC Inspector General’s Office, I believe the Florida Statute numbers I’m going to be addressing are Florida Statutes 944.31, 944.32 and 944.33.  I believe Florida Statute 944.31 explains the duties of FDC Inspector Generals and one of the things it says they’re obligated to do it so conduct a physical inspection of all the institutions in FDC once a year.  This Florida Statute shows us that in 2011 and 2012 the FDC Inspector General’s Office was obligated, and more than likely did conduct a physical inspection of the Dade C.I. Transitional Care Unit.  If they conducted this inspection this statute would’ve obligated them to look in the closet where the unlawful shower equipment was, next to the shower stall that Darren Rainey was killed in.  This means they would’ve seen the unlawfully rigged shower that killed Rainey, and they took no action to order the shower equipment be disconnected.  I believe Florida Statute 944.32 says the FDC Inspector General’s Office is obligated to complete a written report on their physical inspections of all the institutions they physically inspect.  Also, I believe Florida Statute 944.33 explains what type of trouble an FDC Inspector General can get in if they don’t complete written reports of the physical inspections of the institutions in FDC.
Please google the Florida statutes and read them.  From my knowledge of these statutes, what they say hasn’t changed from 2011 till the present.  I’d really like to obtain a copy of the FDC Inspector General’s Reports of the Dade C.I. TCU from 2011 and 2012 and see if they mention the unlawful shower that killed Darren Rainey.  Also, to see, if they do mention said shower, what they say about said shower in their reports.  I know from seeing the illegal shower where Rainey was killed, in the Dade C.I. TCU in 2011 and 2012 that it was there when they conducted their physical inspections in these years.  These reports could possibly be evidence that shows us the FDC Inspector General’s Office knew that the unlawful shower/torturing device that killed Rainey was in the Dade C.I. TCU and they took no action to have it disconnected but instead allowed it to be used as a torturing device to punish and kill mentally disabled inmates.
Please share this blog with your friends and anybody you think would like to join us in our fight for the value of life.  Please sign our petition on Change.org entitled THE LIFE OF BLACK, MENTALLY DISABLED MUSLIM PRISONER DARREN RAINEY DOES MATTER."


Harold Hempstead, aka ‘The Caged Crusader’ - aka The Witness - aka Miami Harold -
From his cell in a Tennessee prison - 2017 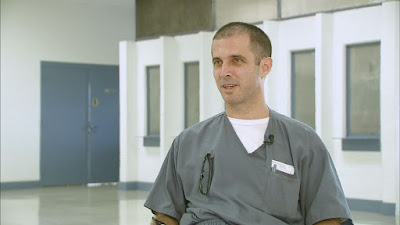 Posted by Save the Holy Headland at 05:58 No comments:

Derek is an anomaly - a deviant from expected standards and norms - seemingly either illiterate or willfully ignorant of his Contractual Obligations in Law as a Member of Parliament - perhaps he-s forgotten he-s not actually a God - that Westminster is not Olympos and that he once took an oath to the Queen - supposedly to act right and be a proper people-s representative - he took the oath and took the money and all the prestige and power that go with it -
Sadly what Derek failed to take on board were the Responsibilities that are the very core of the job - a representative who will not even talk to the local people is a woefully inadequate politician - an aspiring statesman who can not even respond to his own constituents is rather like a doctor who turns away patients on the basis of personal prejudice - in other words he is a fraudulent version of the real thing as he is refusing to perform his most fundamental duty - which - believe it or not Derek - is not to the precious Party - but to the People of West Cornwall!
As blog is my witness Derek is an abysmal public servant - from the day he got into power this website stands - or hangs in space - as an archive of and monument to his crimes - particularly that of ignoring the letters - emails - phone-calls and even personal promises he has made to his constituents -
Well as the bodies pile up Derek perhaps it-s time you learned to write to the People - after all - you have some explaining to do - and some mourning for your dead constituents - you know - the old - the ill - the homeless - the damaged - the young - the unstable - people suffering crises - no-one of any importance to you Derek but People none the less-

The tragic reality is that Derek was voted in in this area and his reactionary Party hold great power here by somehow fooling the people that they will benefit them - the Conservatives play on people-s greed and fear - they try to turn the poor against the even-poorer!  They want to divide and rule - How ironic that as the fate of the World hangs in the balance we have a Victorian-minded backward-looking Capitalist reactionary for our Member of the House!  Such is the political climate of Britain-s far South West - reactionary and paranoid - stuck in a bad dream that-s peddled as some kind of reality and at the heart of it all - there-s Derek Thomas the dishonourable and heartless liar posing as some kind of Man of the Spirit!  (One of my friends is a Christian and he is about as different from Derek as you could possibly get) 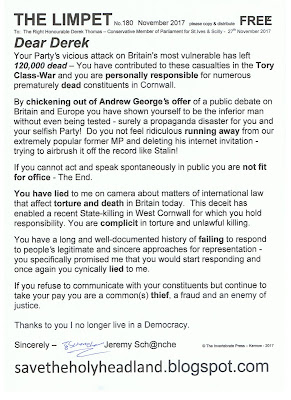 Me and Derek have met before

Economic Murder - brought to you by Derek Thomas and his pals:

And now for something completely different: My wonderful novel The Kramvil - aimed at the local Japanese community
Posted by Save the Holy Headland at 18:13 No comments: