I is RON’s LADY

The Limpet pays a respectful tribute to Britain’s old Tin-Pot dictator, The Grantham Horror, and her pals, Ronald McReagan and General Pinochet, the butcher of Chile. 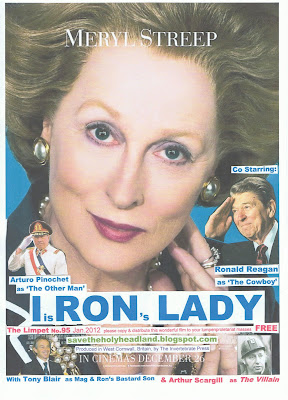 Posted by Save the Holy Headland at 09:44 No comments:

What does it mean to be a rebel-MP? Does it mean you’re upholding the UNCAT? Can you work for the government and make the people Free? Can you BOMB Libya into Democracy??? Do you care if the councilors embezzle our cash? While social services and everything crash. Is this what it means in the Con-Dem-mock-racy? Is this what it means to be a rebel MP? 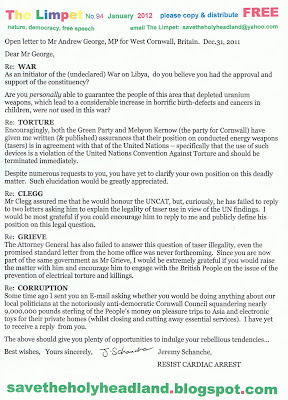 “When the bourgeois parliamentarians fail to respond to and engage with the People, they nurture the seeds of Revolutionary action.” Sid James, 1972 (Carry On Rebelling)

Note Re: DEPLETED URANIUM WEAPONS: An internet image search for the term ‘Depleted Uranium Birth Defects’ will show the actual consequences of these weapons, as used against the People of Iraq and other nations. WARNING: These images are horrifying.

Posted by Save the Holy Headland at 13:22 No comments: