O YE DESTROYERS OF MINE HERITAGE

LIARS: The Limpet accuses MIKE WATERS & 'CORNISHMAN' OF LYING, TROUBLE-MAKING AND CORRUPTION. JOHN WILLIAMS, MATT DIXON & DONNA MACALLISTER
OF 'THE CORNISHMAN' PAPER HAVE BEEN PRINTING MORE LIES AND SUPPORTING THE BULLY-BOY TACTICS OF CHAMBER OF HORRORS STOOGE CHAIRMAN WATERS.
A FULL CONCHOLOGICAL INQUIRY WILL APPEAR IN 'THE LIMPET' SOON. 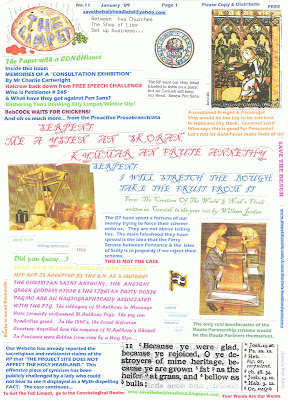 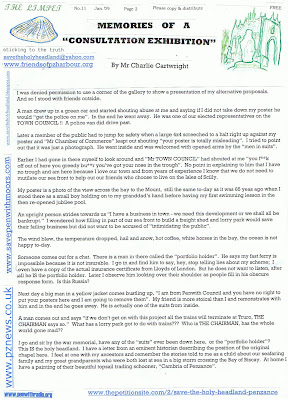 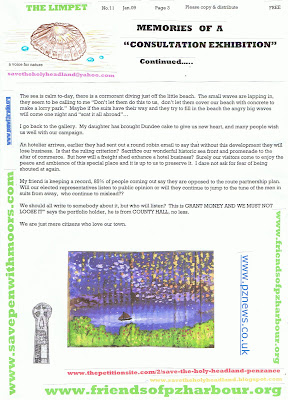 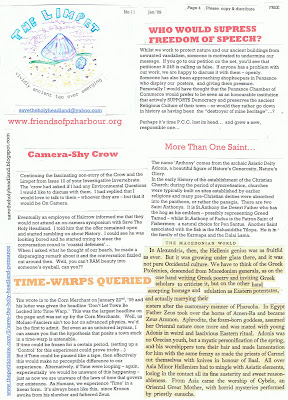 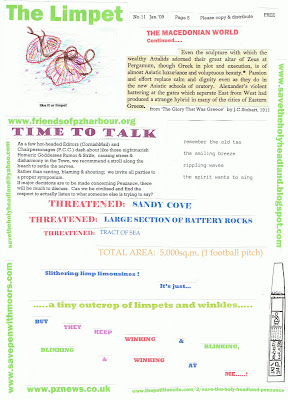 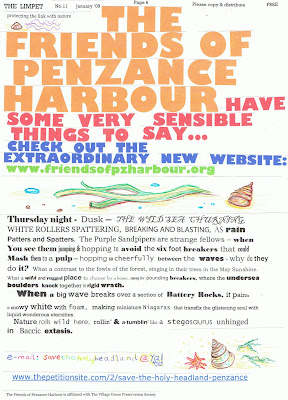 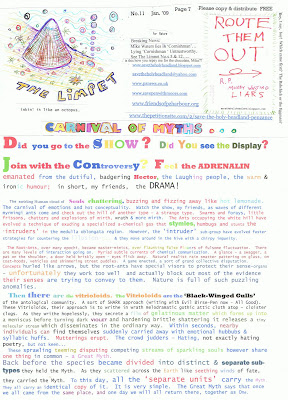 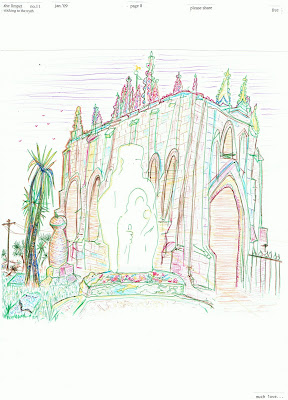 any chance of some peace?
Posted by Save the Holy Headland at 08:06 No comments:

Email ThisBlogThis!Share to TwitterShare to FacebookShare to Pinterest
Labels: charlie-cartwright's-memories-of-consultation-exhibition

THE CROW & THE LIMPET

LIME & LIMPET GREEN, THE SECOND SCENE,
THE FIGHT BETWEEN THE BLUE YOU ONCE KNEW,
FLOATING DOWN THE SOUND RESOUNDS AROUND
THE ICY WATERS UNDERGROUND...
Syd Barrett, 1967 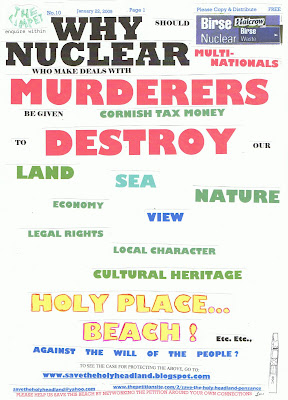 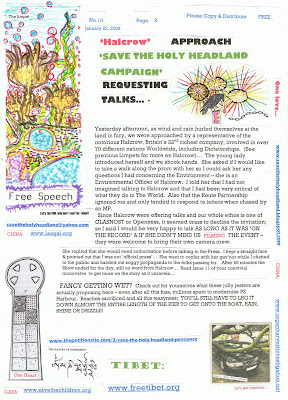 Neptune, Titan, stars can frighten...
Posted by Save the Holy Headland at 05:53 1 comment:

Email ThisBlogThis!Share to TwitterShare to FacebookShare to Pinterest
Labels: run-down-the-pier-in-rain-and-wind-to-board-new-boat

A LIE BETWEEN TWO TRUTHS

ROUTE PARTNERS DENY ST.ANTHONY,
HIS CHAPEL
Right next door to St.Anthony's Chapel, the RP philistines have the insensitivity and down-right wickedness to hand out propaganda - that's costing us a fortune - denying the Sanctity of the very ground that supports them. How I wish the People of Old could bear witness to this, as I know the People of the Future most surely will.
A cartel of Nuclear Waste Merchants, corrupt pen-pushers and deniers of Nature, Culture & Spirituality; who think they can patronize, frighten, deceive & ignore us, before finally robbing us of our Greatest Treasure, our Land & Culture - even the old religion?
These secular Mamonists in local government were originally created by the public need for administration , but now they are a loose cannon, out of control, damaging and parasitic.
THEY NEED BRINGING TO ORDER.
Ordinary people have had enough of Official Dishonesty. We demand Goodness from the State! If virtue whithers atop the vine, it shall bloom in new shoots, ever new and fresh.
J.50.2 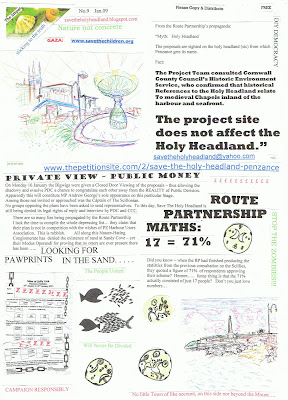 David, a local man was happy for us to publish the comments he put on the back of his form from the RP Show. The box for criticism on the front of the form is very small and is marked 'other'.. 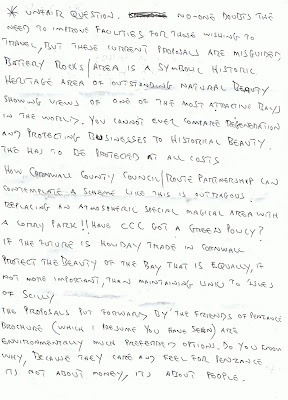 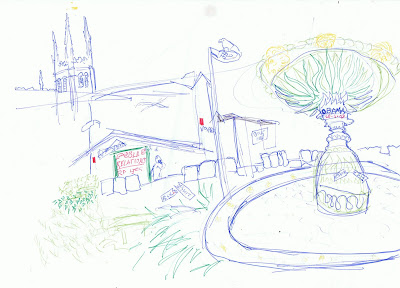 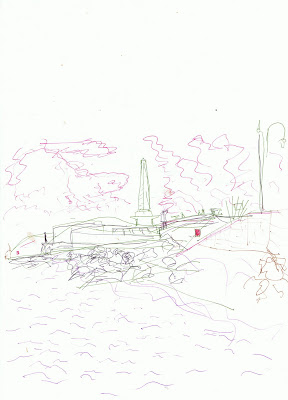 ever new and fresh

Posted by Save the Holy Headland at 05:03 No comments:

Email ThisBlogThis!Share to TwitterShare to FacebookShare to Pinterest
Labels: and, culture, land

SAVE THE HOLY HEADLAND WELCOMES OBAMA !

THE LIMPET No.8 BLACK POWER ISSUE 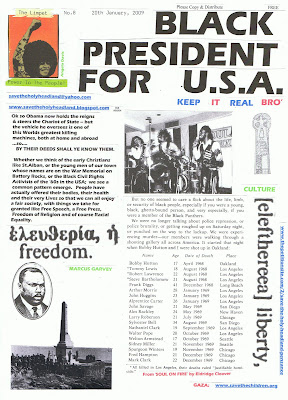 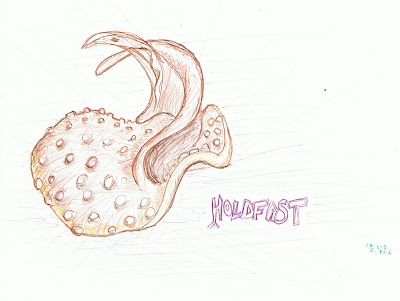 Posted by Save the Holy Headland at 16:39 No comments: 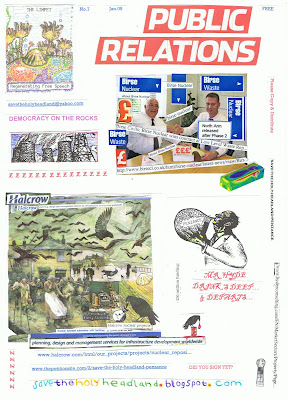 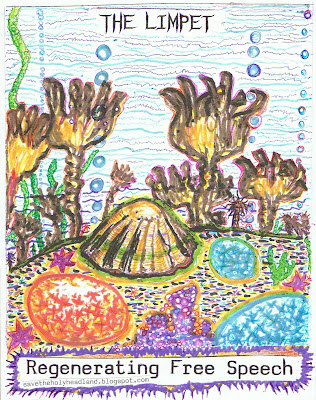 "On a huge hill
Cragged, and Steep, Truth Stands, and he that will
Reach her, about must, and about must go"

In a transparent attempt to further inflame the atmosphere of material desperation, 'The Cornishman' gets you all hyped-up and ready to sign up to anything that smells vaguely of cash, whilst trying to gloss over the real situation. No Seals on the cover this week, folks...
CON-SULTATION:

Your own agenda of what you wish to say to them, and leave in writing is of course, up to you! It is likely that Environmental issues will be avioded except on the two days in mid-week, ending early on Wednesday... How convenient... Remember, this is not a referendum and you get NO VOTE. The Route Partners are free to ignore your comments, though it is still good to express them; but, as MP Andrew George said, this Consultation has
"NO LEGAL STATUS WHATEVER."
What you CAN do is object to the Planning Dept. of PDC when the Application is submitted - they are legally obliged to take notice of public opinion at this stage in the game.
We also have a PETITION addressed to the Secretary of State for The Environment, Hilary Benn MP at:
www.thepetitionsite.com/2/save-the-holy-headland-penzance

We will hear differing viewpoints expressed over the next few days, as there are many ways of seeing.
Between the Vospers Building and the Barbican, is a little patch of neglected land, a little car park, some wasteland. Lining the edge of the waste land are some massive slabs of Cornish Granite. Too big to haul away, these liths have dreamed there since a past that passed so long ago. Long have they lain there recalling the days of old. All the Times and Dreams of the Old Ones they have endured. Once they resounded with voices uplifted in grateful praise, to the Protector of fishers. Once they were illumined with the flickering light of candles and Faith. Words of Truth and Sanctity rebounded from their granite faces. For these are the bones of St.Anthony's Chapel, a beacon of celtic light to guide the village through the dark ages.

Posted by Save the Holy Headland at 04:55 No comments:

Email ThisBlogThis!Share to TwitterShare to FacebookShare to Pinterest
Labels: minted, money, once, was, where


LEXIA SAS EINAI LEXIA MAS
YOUR WORDS ARE OUR WORDS 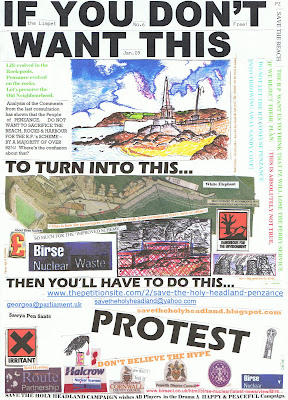 Posted by Save the Holy Headland at 05:58 No comments:

The Limpet No.5 asks Who Owns The Cornishman?

ECONOMIC VIEW:
Why a single Super-Boat for passengers & freight would be an economic disaster:

Firstly, this leviathan would be much too large to get into the dry dock - therefore Penzance's first economic blessing from the Route Partnership would be the termination of the maintainance contract for Holmans.

Secondly; because freight is needed in the Scillies constantly, regardless of season or weather, the ship must sail even when no tourists wish to travel, therefore burning vast amounts of fuel, which, apart from further poisining the air, would of course drive ticket prices up, thus losing even more passengers!

There is also the safety issue of carrying poisins and explosives on a passenger ship.

Conversely, a two-vessel system, with a fast and modern ferry, would be flexible and could react to fluctuating demand - thus saving considerable fuel costs and cutting down on cruise-time, which for most land-lubbers is seen as an advantage!

We could well end up with a ferry service even more exclusive and expensive (alot of working people in Cornwall can't even afford a trip to the Scillies as it is!) These higher costs would inevitably be passed back to ye humble poll-tax payers! Sorry, I meant Council Tax... Oh no, I s'pose now it's Super-Unitary-Council-Poll-Tax... and the only benificiaries of this monumental and tragic blunder, this collective machine-gunning of feet, would be the Route Partners themselves - The Isles of Scilly Steamship Company,The Isles of Scilly Council, Penwith District Council, Cornwall County Council, Cornwall Unitary Council, The Duchy; and our preposterous nuclear wasterels, Pirse and Helcrow. |Giving Cornish tax money to these last two financial behemoths seems somehow just plain wrong.

Don't forget: This website contains our entire gallery of posters - check in 'Older Posts' - Now is a very good time to print and display them. It's all about free speech - it's at the Heart of any real democracy. 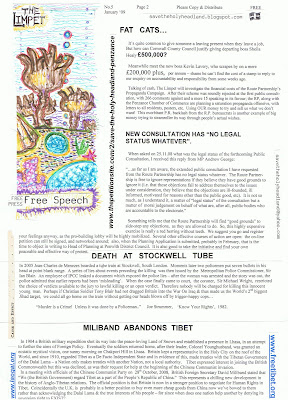 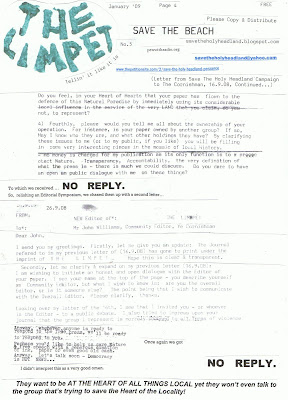 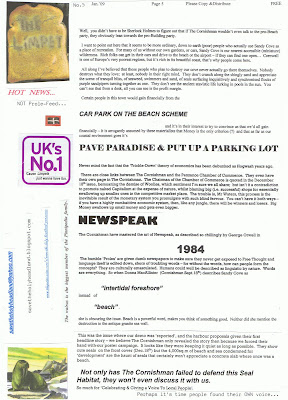 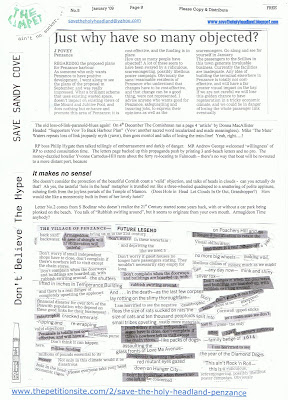 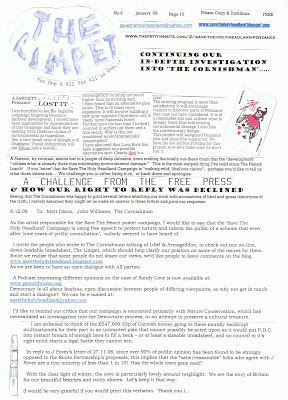 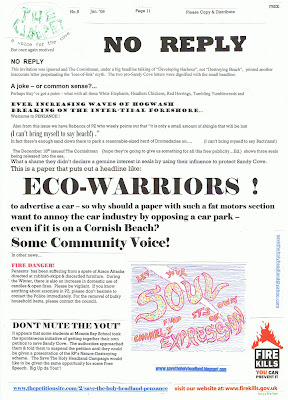 P.S. Not only have Penwith District Council, Cornwall County Council, the Route Partnership and Mike Waters of Penzance Chamber of Commerce been stifling debate, failing to resond to legal enquiries and trying to spread a wave of economic paranoia throughout Pensance, but some thug has gone to the Holy headland and slashed and vandalized posters from not only the Save The Holy Headland Campaign, but several of the other groups who are working to stop this mad scheme and to preserve Sandy Cove and Battery Rocks and the medieval harbour itself. Some people seem to get annoyed by Freedom of Speech - perhaps they should move to China.
Penzance has an incredible history. Our town started as a sheltered cove with a rock-hewn Chapel on a granite headland - thus providing a Haven for boats and a Haven for Souls. When Cornwall was a Nation with a Language and a King, this very place was Blessed, Sanctified and Dedicated to the Light of the Truth.

Due to the instability of the current Human situation, with war, economic collapse, increasing gun-play, knivings and repression; with politicians chipping away at our basic Freedoms - we are at a historic crossroads. It's up to you to choose the kind of Culture you want. If you do nothing, but only complain, well... nothing changes, does it? As I write these words, SANDY COVE EXISTS. Our descendents will surely despise us if we let it be wiped out.

IF THE ROUTE PARTNERSHIP GET THEIR WAY SANDY COVE WILL NOT EXIST. 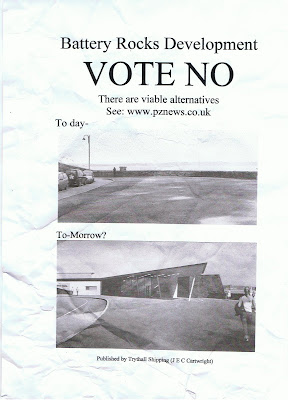 Sawya Pen Sans!
Posted by Save the Holy Headland at 08:26 No comments: