For some years now the elder eldritch lepidopteral lava had been crepuscular-flitting and transmitting the pieces of the Minoan Mosaic Culture to me via mystic meet-ups at the midnight phone-box in Pendoze – Behind the Hump-Me Dump-Me statue - In the heart of the old Jewish Market District – near the wharves where whalers rot unsung at rusty anchor and doubloons rattle in the silt and bilge underfoot – Katapliktikos was the Great Antennaed One as he quixotically and osmotically beamed soft luminous neon blue-white rays from his ancient centres of knowledge and shone them my way – Such was the power of the rays I was frequently stunned and on occasion rendered totally unconscious – only to come to some time later – slumped in the midnight phone-box – some time after midnight now of course and rain rattling on the carapace shell of the tiny glass hut -  Never without the glow of celestial knowing do he leave me before going back to the myriad unravelling ways of the night and the mystic business of his thread-spinning and weaving kind -   In tubular glass vials and philes of philtres he left chemicular imprints of significant finds in the realms of organic-structure and the nature of all things -  On waxen cylinders he left strands of music in many forms and styles for a vast range of instrumental forces -  Jars and pots and chests and boxes of scrolls and parchments he passed on and also glass slides and photographic images in many forms – Keys – cyphers – clues – lexicons and harbingers were left loaded – pointing the way to yet more doors to kick open and unleash the collected forces of many cultures and powers – many magical traditions and shamanic studies were included in the ken of the Caterpillar-s whirling feelers – his sentient all-embracing mind flowed over with cultural knowledge and inside nature knowledge like a mighty fountain that sprayed the pigeons that played at its splashing feet -   Shedding the hasps and masks of identity and mortal conformity he re-emerged and re-appeared constantly in ever-slightly-changed forms – ever aetherial and elusive – ephemeral and insubstantial – more idea than flesh-body – more thought-form than sinew – this beast was composed of the very threads of mind-stuff and knew no such limits as ye or I do know – So to learn of lute and lyre and kindle Olympos-s fire in company with this great ephemeral creature was joy untold and over aeons did he the tale unfold – Ever holding in the folds of his robe a book – a telescope and a globe – therewith to scan the scene and scour the worldly-realme and surf upon the billows of the foamy deeps and bustle free and high among the puffy clouds of cumulus nimbus blue and aether and jazz on in the sunset-s gorgeous dripping scarlet purple honey of a sunset howldrehevel evening on old Kernouac Cornish cliff most high and gritty grained bulwark of Atlantek-s roaring shore -   Zeibekiko he scratched with peculiar charm on the many-stringed lyre he clutched with several of his iridescent exoskeletal arms as he spun the melody in slow sedate largo nine eight shuffle – A noble rhythm for an eagle with wings outstretched or circling vulture high above the mountain-valleys looking for carcass with bead of an avine all-spying eye – Thus did he vouchsafe:
Melting myself constantly –
I dissolve into cocoon silk -
Then I spin again –
Afresh the tale unwinds –
You won-t unravel me by grasping at the thread -
This tale starts at the centre –
*
Winding country road – Many years ago – Leaves blowing from the trees – Yellow the light of the sun – Rain had been driving in sheets – Mellow the smell of the earth – Birds were returning to song – Scatter the light of the sun – Raindrops on dewdrops on grass – Bush-crickets running for shelter – ants sliding skilfully down their holes – Rabbits are running for cover – Thunder breaks dark clouds in two – dark covers over the sky – coolness fills into the air – breeze softly mumbles around – leaves stirs about on the ground – windy and starting to rain – drops big as coins hit the ground – Ears of the forest look round – eyes that have listened to the ground – Skin that has smelt all the ground – whiskers that twitch with the sound – listening the forest around – creatures are stirring in sound – breath coming out of the ground – badgers are mulling and brooding – snorting and snuffles and grunts – badger-breath sticky and hot – Fly hiding under the leaf – glistening radiant eye – shiny the carapace glows – thorax and feelers as one – Well the moving of the morning was unfolding and the waters of the ocean were all seething with scintillating light the waters dancing and all around the winds were softly singing and the hearts of countless people lifted upwards and the rain of light fell gently on the people and the laughter of the throngs was like an ocean and the dancing in the streets was like a heatwave and the singing went right through the flowing morning and the fires still burnt on by nightfall-s darkling and the sparrow and the starling were rejoicing and the ivy was entwining with the elder - 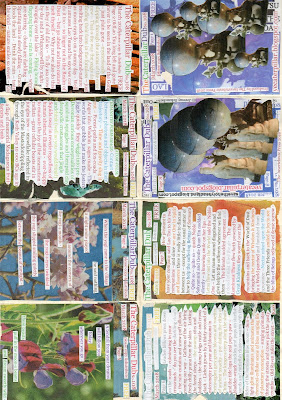 melting from the edges - the surface dissolves to leave only the radiant centre -
Posted by Save the Holy Headland at 16:37 No comments: