On 23 June 2012, a black Muslim convict was tortured to death at Dade C.I. in Florida.  He was locked into a specially rigged shower stall for almost two hours, in temperatures of up to 183 Fahrenheit.  When he was eventually found, most of the skin had peeled away from his dead body.  An inmate was later ordered to throw the skin into the trash.  This brutal murder was covered up by guards and other authorities, until inmates, including Harold Hempstead, succeeded in finally contacting the Miami Herald newspaper, which broke the story.
Although the U.S. Constitution guarantees free speech, the reality of life in the Florida Department of Corrections, like its counterparts in many other American states, is different.  Inmates who merely file complaint forms, let alone talk to the press, can expect brutal retaliation from certain of the guards.  Inmates who stand up and blow the whistle on brutality, abuse and corruption are taking a great risk to their own safety, in a penal system that has degenerated into routine brutality, systematic starvation, and regular torture and murder.
This film should never have been made.  People should not be steamed to death in locked showers, screaming for mercy, dying alone in terror and agony.  USA is not the only nation to conceal horrors such as this, but the USA has a Constitution, a blueprint for justice, democracy and the rule of law – not all nations have such a thing.  Furthermore, the USA is a vital element of western culture and civilization.  For this nation to live up to its promise, its meaning and its true identity, something must change.
Fyodor Dostoyevsky, the Russian author of such books as Crime and Punishment said “The degree of civilization in a society can be judged by entering its prisons.”  For ‘America’ to ever be ‘Great’ it’s going to have to take a radically different approach to the treatment of those it locks up and takes into its power.
This film has been made in an attempt to publicize the evidence of the prisoner, witness and whistle-blower Harold Hempstead who is endangering his own safety to bring justice for the murder of a mentally disturbed black Muslim man, Darren Rainey.  On 7th November 2016, the prisoner Daniel Geiger died in the custody of the Florida Department of Corrections.  He is mentioned in the film as the inmate for whom the ‘shower-treatment’ was originally devised.  Daniel Geiger was put in the special shower on more than one occasion.  He was also systematically starved.  Regular food-deprivation was part of the regime at Dade Correctional Institution and Harold Hempstead is convinced that is has contributed to more than one death.
Records show that this prisoner’s weight at the start of his detention was 179lbs, which is just over 12 ¾ stone.  However, when New Yorker journalist Eyal Press spoke to Daniel Geiger’s mother, Mrs Debra Geiger, she reported that in 2012, her son had told her that his weight was down to 105lbs (7 ½ stone).
Whatever crimes a man may have committed, the Constitution, the foundation document of the nation, requires, in the name of the people, that convicts shall be treated according to lawfully encoded standards of justice and welfare, with recourse to legal redress of grievance and the free speech to do so.  While the rights of the convict are obviously considerably fewer than those of the free citizen, they are, nonetheless, clearly defined and enshrined in law, and should, when circumstances deem it necessary, be vigorously protected by we, the people.
Notes:
1.  ‘Affiant’ means the author of an affidavit or witness-statement – which in this case is Harold Hempstead.
2.  ‘C.I.’ stands for ‘Correctional Institution’ or prison.
Here’s the interview I did with Harold Hempstead in summer 2016 for my paper, The Limpet:
https://savetheholyheadland.blogspot.co.uk/2016/06/harold-hempstead-murder-witness-talks.html
The first of numerous articles from the Miami Herald newspaper on the murder of Darren Rainey and conditions in the Florida Department of Corrections:
http://www.miamiherald.com/news/local/community/miami-dade/article1964620.html
An in-depth look at Florida’s mistreatment of mentally-ill prisoners:
http://www.newyorker.com/magazine/2016/05/02/the-torturing-of-mentally-ill-prisoners
George Mallinckrodt is a psychotherapist and outspoken advocate for the mentally ill, who has written a book about his experiences working at Dade C.I.  Its central focus is the killing of Darren Rainey and it’s entitled Getting Away With Murder:
http://georgemallinckrodt.com/
The blog of Harold Hempstead’s sister and advocate, Windy Hempstead:
https://helpmybrotherharoldhempstead.wordpress.com/
Many articles on Darren Rainey, Harold Hempstead, FDC and more here:
https://wobblywarrior.wordpress.com/
Finally, here’s the written text of Harold Hempstead’s sworn affidavit of 5th May, 2016, the document read in the film, which describes the torture and murder of Darren Rainey that guards and officials tried to conceal.  Convict-whistle-blowers are taking an enormous risk by witnessing the truth and protecting society’s most vulnerable members.  Please help their work by reading and sharing the evidence.  Thank you and stay free.
https://savetheholyheadland.blogspot.co.uk/2016/05/harold-hempstead-evidence-darren-rainey.html

Update:  25.1.2017: Over the last  couple of days I've been sending out the following email to various people.  It reached them all except The Tribune which was bought out and closed and Al Jazeera, who's contact form wasn't working.

C.C.:  Antonia Farzan, Miami New Times;  St.Petersburg Times;  Orlando Sentinel;  South Florida Sun Sentinel; The Tampa Tribune;  The Florida Times-Union;  The Palm Beach Post;  Sarasota Herald-Tribune;  The News Journal;  Florida Today;  Gainsville Sun;  New York Times;  Washington Post;  Russia Today;  Al Jazeera;  Black Lives Matter;  The London Times;  The Guardian;  The Independent;  Reprieve;  Amnesty International;  Big Issue;  Fulham Football Club, London;  Florida Tourist Board;  etc.
Brothers and Sisters,
You are receiving this message because your names appear on Harold Hempstead's affidavit of 5th May, 2016, detailing the murder of Darren Rainey at Dade Correctional Institution on 23rd June, 2012.  Since Mr Hempstead wanted you to receive the written evidence, I thought it might be useful to have it in video form too.
I am not aware of the current progress of the investigation into Mr Rainey's killing, four and a half years ago, but I feel that since the slaughter was initially concealed by the authorities, it is appropriate now to compensate for this by giving the event some more publicity.
You may be wondering why Mr Rainey's death is a matter of concern to a foreigner - after all, Darren Rainey was a black-Muslim, a drug-user, mentally-disturbed and poor.  Well, I don't want a world where people are boiled to death in showers - I want a world of wisdom and compassion.
With thanks to all who are genuinely working for justice.
Good wishes,  Jeremy Sch@nche
Newlyn, Kernow, Great Britain.
https://www.youtube.com/watch?v=KHdVztdD10k

Posted by Save the Holy Headland at 19:41 No comments:

Poor head-crazy primate Homo sapiens is in a collective confusion, riddled with angst, broiling with aggression and fundamental fear.  Ah, if only he knew his true nature.
We’re at a crossroads – like in the 1930’s – only now we have nuclear weapons.  We know now that the survival of the world depends upon swift international cooperation to cease the poisoning of this, our beautiful and mysterious home-planet whilst we still have the ghost of a chance.
A new monster rises in the west.  A long shadow falls across the world, merging into the darkness of Russia, Turkey, Saudi Arabia, Daesh, Israel and all.  Few countries are innocent.  Few individuals are guilty.  If our authoritarian power structures are not working for us, then we must tear them down.  Life must change – or life will cease.  A fresh mind is required to face a problem like this, not a stale mind.  Will the comforts of beer, consumerism and TV keep us asleep forever?
Can we ever learn from history?  Or will we go complacently to our doom?  To be honest with you folks, I’m kind of worried about that drunken gorilla that’s just taken over U.S.A.  He seems to embody ignorance, and that’s a very dangerous thing.  The thing with Chump is, essentially, Chump IS Capitalism.  He is its monster-spawn, its misbegotten eldritch halfling, its product.  Growing up in a monstrous situation, how could he fail to grow up a monster, it’s always the same with these kids from bad homes.  If the parents had had to live in reality like most of us, this would never have happened.  But since they grew up deprived of all of life’s morally strengthening experiences, well, what could you expect?
It’s no joke though, as now the little bastard has his fat, sweaty, trembling pork-sausage of a finger hovering just over the button that destroys the planet.
Well, what can you do?  Stop and think.  What can you do?  I suppose you can do what you can.  The trouble is, people don’t usually start moving until they are desperate, and not enough people are desperate enough – yet.  In 1917 they were desperate enough in Russia to overthrow the Czar and create a new type of society.  OK, it got fucked up by the Bolsheviks almost immediately and turned into a vile dictatorship of the inner party, but that’s another story.  Revolutions frequently go horribly wrong, but that does not necessarily justify the existence of the previous regime.
Every single right we have was acquired by people demanding those rights from a position of strength.  You cannot demand your rights from a position of weakness.  Parliament, Votes for Commoners, Worker’s Rights,  Votes for Women, Civil Rights,  Animal Rights, Gay Rights, Legal Marijuana – you name it – they’ve all been achieved through struggle and sacrifice, in short, through activism.
Of course, there was a lot of activism in the sixties.  Maybe the mind-expanding drugs had something to do with it – and of course, there was so much to be active about.  It was an ultra-politicised decade, but also a super-cultural decade, a veritable renaissance, which saw it’s great flowering in 1967, the Summer of Love.  Even as a small child I knew something was up.
So look – it’s the 100th anniversary of the October Revolution and the 50th anniversary of the Summer of Love – wouldn’t the obvious thing be to combine 1917’s zeal for social reform with 1967’s outpouring of transcendental love in 2017?


Anyone got any better ideas? 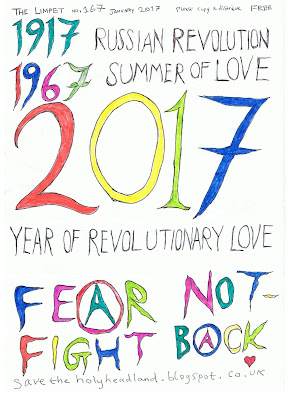 Posted by Save the Holy Headland at 10:53 No comments: