It is not at all too late
to write to Cornwall Council (at Penzance office) with letters objecting to the RP's moronic planning application numbers PZ 09-0213-P, 09-0214-LBC & 09-0216-CAC (That's the problem, you see) addressed to:
MR MATT BARTON,
This can also be done on-line.
The council will continue to accept objections until the first planning meeting - which could be delayed by something.

So for those of you who didn't make the 'deadline' - now's your chance to keep up the blizzard of outrage in the name of Mother Nature and all them li'l' ol' critters out there!
Have any of these office-eels ever once stopped to
CONSIDER HOW THE WILD ANIMALS FEEL ABOUT IT? Well unfortunately seals, dolphins, squids, fishes, cuttles, crustacea, molusca and the rest of the wildlife crew are notoriously illiterate - besides which, animals limbs are ill-suited to the biro and keyboard, even if they could get their dumb little heads around English syntax and grammar, let alone our notoriously idiosyncratic system of phonetic/pedantics. Can you see a bream dashing off a quick philipic in microsoft word, castigating some complacent local planning dude? I hardly think you're being realistic! Anyway, I digress... my point is, we are the part of Nature that CAN grip a biro and use it mightily to wield a word for the world of birds and wild things. WE GIVE THE WORD. 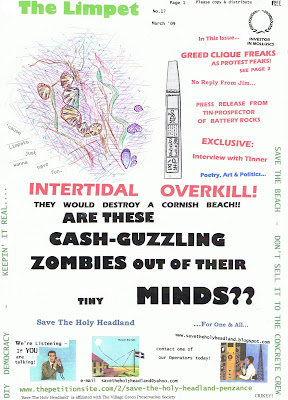 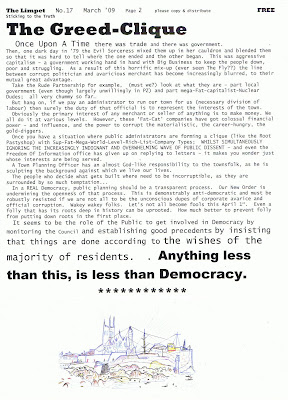 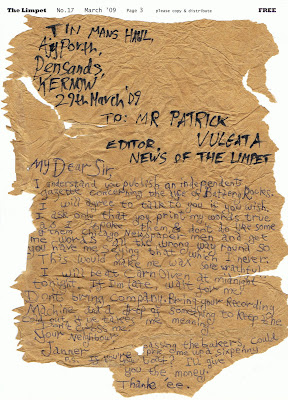 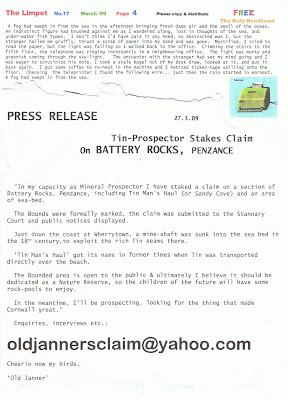 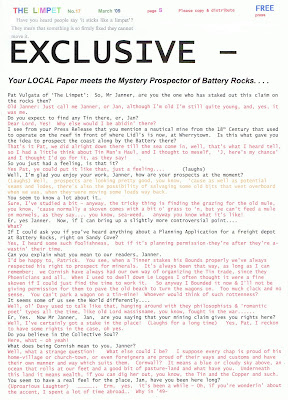 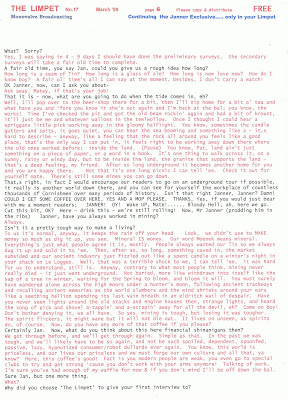 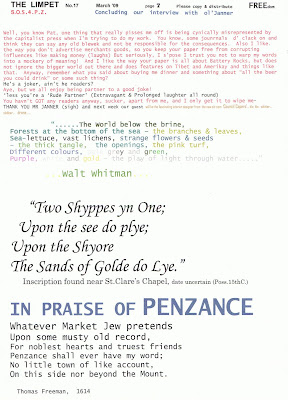 SHINGLE OR TARMAC - YOU DECIDE

DOLPHINS OR DIESELS - YOU DECIDE

Posted by Save the Holy Headland at 13:16 No comments:

WHAT IS DEMOCRACY? - discuss 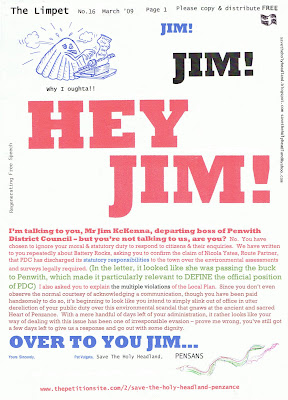 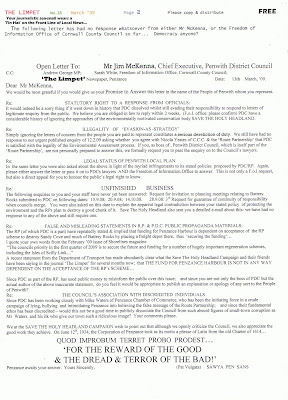 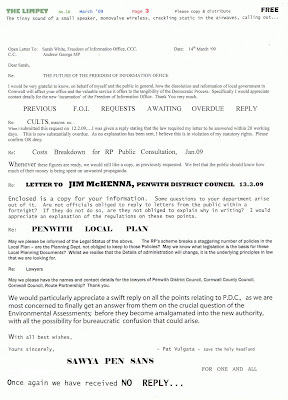 Posted by Save the Holy Headland at 06:21 No comments:

Email ThisBlogThis!Share to TwitterShare to FacebookShare to Pinterest
Labels: and-does-trelawney-live?

POPPED ST.RAFFIDY INTO A WHEELBARROW & TRUNDLED HIM OFF TO THE CHAPEL YARD

VOX LAPIDIS - The Voice of a Stone
Some wonder what I am, or say
I'm but a block of stone;
'Tis true, I am, ah well a day!
Unheeded and unknown;
From Ludgvan's rock hewn long ago
When Saints were Cornwall's glory,
But can you in this borough show
A stone with such a story?
Vox Lapidis: A Plaint heard in St.Mary's Churchyard, G.B.Millett, 1882. 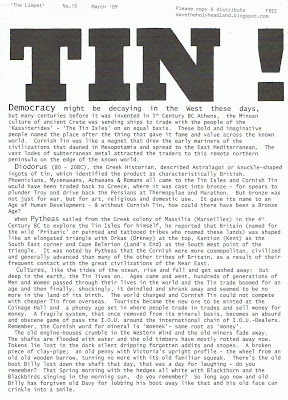 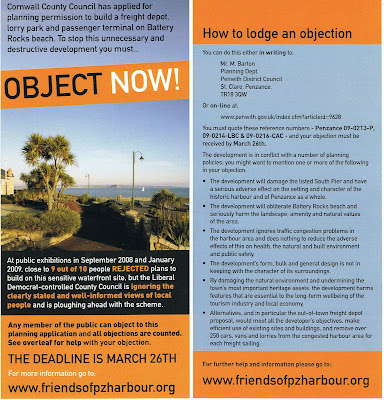 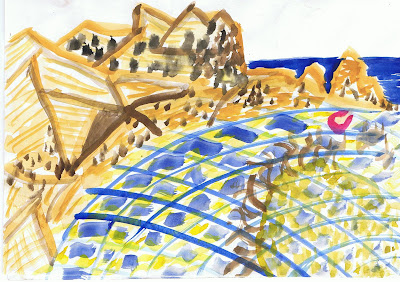 SAVING BATTERY ROCKS AND SANDY COVE FOR THE CHILDREN OF TOMORROW - NOT SELLING IT OFF FOR THE BENEFIT OF THE GREEDY FEW...
Posted by Save the Holy Headland at 07:28 No comments:

Email ThisBlogThis!Share to TwitterShare to FacebookShare to Pinterest
Labels: tin-mans-haul-for-one-and-all

Twice the RP consulted us, twice we said NO - now they apply for Planning Permission! Who do they represent?

"NOW FEAR NO MORE SHALL BRIDLE SPEECH;
UNCURBED, THE COMMON TONGUE SHALL PRATE
OF FREEDOM; FOR THE YOKE OF STATE
LIES BROKEN ON THE BLOODY BEACH
AND FIELDS OF SALAMIS, WHICH HIDE
THE RUINS OF OUR PERSIAN PRIDE."
From 'The Persians' by AESCHYLUS, 472BC.
'"This above all others, my dear Socrates," the woman from Mantinea continued, "is the region where a man's life should be spent, in the contemplation of absolute beauty. Once you have seen that, you will not value it in terms of gold..."
From 'The Symposium' by Plato, Composed approx. 385BC.
"Despite its defects, this river has many good points. It is beautiful, and it sounds like music as it rushes down the hills, so that it makes a stupid person like myself find it enchanting, unwilling to tear myself away from it. And like the river, I cannot fit in with the times, but I can console myself with writing which mirrors and reflects all creation and its myriad changes and washes away all impurities, even as the river does. Thus fitting words of folly to celebrate the River of Folly, I lose myself in the universe, becoming a part of the vast creation, go back to the age of the nebulae, and mingle with the Inaudible and the Impalpable, hidden in a primeval stillness, unknown to the world. I have written eight poems on the River of Folly and have them inscribed on the rocks. "
From the introduction to the Folly River Poems,
Liu Tsungyuan, 773 - 819AD, Kweilin, South China

"The Daneian Forest shall be wakened from its sleep and, bursting into human speech, it shall shout: 'Kambria, come here! Bring Cornwall at your side! Say to Winchester: 'The earth will swallow you up. Move the see of your shepherd to where the ships come in to harbour. Then make sure that the limbs which remain follow the head! The day approaches when your citizens will perish for their crimes of perjury. The whiteness of your wools has done you harm and so, too, has the variety of their dye. Woe to the perjured people, for thier famous city shall come toppling down because of them!"
'The ships shall rejoice at such a great increase and each one of them will be constructed out of the material of two.
'A Hedgehog loaded with apples shall re-build the town and, attracted by the smell of these apples, birds will flock there from many different forests. The Hedgehog shall add a huge palace and then wall it round with six hundred towers.
'London will view this with envy and will increase her own fortifications threefold. The river Thames will surround London on all sides and the report of that engineering feat will cross the Alps.
'The Hedgehog will hide its apples inside Winchester and will construct hidden passages under the earth.
'In that time the stones shall speak."
From 'The Prophecies of Merlin'
by Gaufridus Monemutensis {Geofrrey of Monmouth}, written at Oxford,
between 1129 - 1151AD

"while money doesn't talk, it swears

OTHER EFFECTIVE STEPS YOU CAN TAKE TO PROTECT OUR AREA:
As well as writing to Penwith District Council Planning Department with letters of objection to the proposal to build over the beach, letters can also be addressed to Hilary Benn, MP, Secretary of State for the Environment. We will soon be passing our petition on to him, so supporting letters are always good to add weight to it. If you have not already signed it, you can find it at:
www.thepetitionsite.com/2/save-the-holy-headland-penzance

Since the Ministry of Transport is the fund-allocator, and they are currently reviewing the RP & Penzance Harbour situation, it might be good to inform Geoff Hoon MP that the Route Partnership has been brought into disrepute in Penzance through the many falsehoods in its propaganda campaign. Aside from their historical and cultural revisionism, they have been advertising under false pretences by putting forth the idea that the fund for Penzance Harbour improvements is solely dependant on local acceptance of their particular scheme. If anyone else tried to trade in this cavalier manner they would be run out of town - so are official bodies to be granted imunity from the normal regulations of trade?

According to a letter received from Nicola Yeates, Project Chief of the RP, PDC are satisfied that all legally required Environmental Procedures have been adhered to in this case. I have asked Mr Jim McKenna, outgoing boss of PDC to confirm this crucial point in writing some weeks back - as he has not yet replied to me, maybe he will reply to this point if enough people add their own voices... I believe public officials have a legal responsibility to reply to communications from the people they are paid to represent.

Also, if you can print off and distribute some of the flyers & posters below and circulate them around your circle, you would be doing a big favour for MOTHER NATURE! 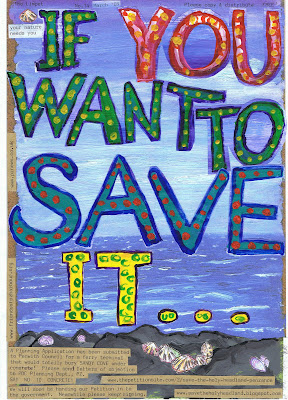 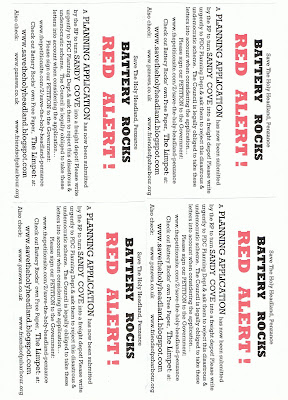 {Don't forget to check our older posts}
Posted by Save the Holy Headland at 16:59 No comments: