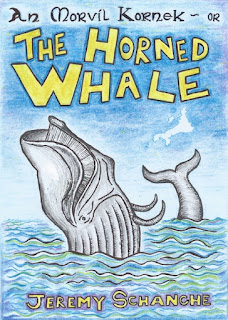 Get your electronic copy here:  https://itunes.apple.com/us/book/horned-whale-or-morvil-kornek/id1164163097?mt=11   or at numerous other sites.

If it’s words you want, this book’s full of ‘em…
The Horned Whale or An Morvil Kornek is the first book by Jeremy Schanche.  It contains a short story, a full-length novel, a novella, a collection of poetry and two glossaries.
The Janetta Stone is a subterranean tale which explores the origins of tin-mining and the roots of language.  Set in Cornwall’s metalliferous far-west, the story is partly based on the author’s own experiences as one of the last generation of Cornish miners.  Glimpses of an underground past melt into the present as the man from Chyannor  shows reporter Pat Vulgata around the old ‘bal’, or mine, that runs out under the sea.
The Kramvil is a gothic novel of mystery, romance and home-made science, set in the archaic fishing port of New Lynsmouth, circa 1911.  Elias Gillpington is a young scholar, quietly pursuing a life of learning until he encounters the elderly Lazarus Taxon and gets drawn into his world of extraordinary experimentation.  Desperate to win the love of the luminous Constance Place, Elias pursues his fate through the foggy alleys of the Old Quarter, while back in the lab, something is taking shape, swelling, writhing, emerging-
The fog, the sea, the dappled sunshine and the clacking, rooking crows are as much a part of this story as its cast of rare characters and the stream of inexplicable phenomena through which they pass.
Gerlyvrynn Kernouac or the Cornish Glossary gives translations for the Cornish words which occasionally enrich the script.  Cornish is a Brythonek language – part of Ancient British culture and pre-dating Sowsnek, or the English language by many centuries.
International Glossary contains words from thirty-one different languages, ancient, medieval and modern.
Ghost-Hulk of a Phantom takes a laconic dive into the world of a struggling writer whose only wish is to get his book published.  Determined to make a few quid before he gets old, the fame-hungry, whimsical and volatile Arthur Buxtereide has a whale of a time in the wacky world of publishing.  A beastly tale.
Monstrous, lyrical and dream-like, this collection of writing from the Keltek heart-land offers rich food for those who look within. 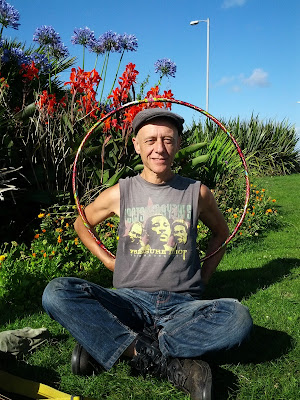 Jeremy Schanche has also published over 450 papers on art and politics which are all available free.