DEREK THOMAS MP DOES NOT THINK RENTED HOUSES NEED TO BE FIT FOR HUMAN HABITATION :
In a chilling demonstration of their utter disregard for the wellbeing of the people, not a single Conservative Party Member of Parliament (MP) in Cornwall voted for rented houses to be required to be fit for human habitation.  Many of these people are actually landlords themselves, including Prime Minister Camoron.  According to the International Business Times, our local ‘representative’ Derek Thomas is also profiteering from this trade in human misery.  Proving that he is capable of response, Derek has apparently denied being a landlord.  Whether he is or not, he does not think your house needs to be fit for HUMAN habitation - maybe the Conservative Party view those who do not ‘own’ ‘property’ to be somewhat less than human.
Personally, I think an MP who shows such inhuman disregard for the health and well-being of our children, our people, is an entity of great negativity.  The fact that he can’t answer his letters also makes him an inferior politician, a man who draws a fat salary, ignores his constituents and damns the children of Cornwall to live in squalor - in short, rather than a representative of the people, he is truly the antithesis of our interests, our potential and our future.  Derek Thomas, you are no friend of the people. 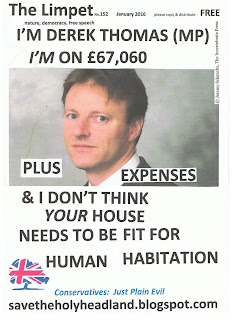 The Effects of Capitalism:
http://www.independent.co.uk/news/world/politics/just-62-people-now-own-the-same-wealth-as-half-the-worlds-population-research-finds-a6818081.html
- - - - - - - - - - - - -
11.12.2015 13.00:
IMMEDIATE REACTION TO ANOTHER POLICE KILLING:
The day after publishing the Heads on Spikes article in The Limpet No.151 about a police-killing in North London, I discovered this article in The Independent:
http://www.independent.co.uk/news/uk/crime/wood-green-police-shooting-man-dies-after-being-shot-in-intelligence-led-raid-in-north-london-a6769151.html
It’s a brief article.  Essentially the police have shot a man dead.  It’s being defined as ‘intelligence-led’, which I would imagine is cop-speak for ‘we knew something’.  The implication is that the secret information they had about this person justified them going round and shooting them dead.  That better be some pretty intelligent intelligence.
There are, so far, no reports of the deceased having been armed, or having aggressed the police and these things are usually mentioned in news reports as being relevant.  The police have also announced that the death was not related to terrorism.  I’m guessing that the next most likely category of suspect would be ‘gang’ and that we might be looking at a black man who may or may not have had a gun or knife in his house or flat.  Just guessing.  Based on previous experience.  What strikes me most about this killing is the remarkable lack of information that is initially released by the police.  For instance, the most obvious and burning question - WHY did they kill this person?  Would it not be a good idea to release that information right away.  Would that not be the way of ‘transparency’, ‘accountability’ and all the other fine democratic values that are meant to be embodied in our police ‘service’.  Instant accountability would mean alot more to the public than the usual practice of taking time to ‘get the story straight’.   It has emerged that the police squad involved wass FOC U.  According to London Police:   “Two of the men were arrested in the area of Bracknell Close, N22. They have been arrested on suspicion of conspiracy to facilitate the escape of an individual from lawful custody. There were two further related arrests. More on this tale as it develops.


Murder in the British Army?
Can You Shoot Yourself In The Head Twice, Or In The Chest Five Times?
http://www.independent.co.uk/news/uk/crime/deepcut-allegations-reveal-culture-of-cruelty-where-sexual-assaults-and-rape-were-widespread-at-army-a6815266.html


Здравствуйте друзья
http://yecaterpillar.blogspot.co.uk/
Update:  You can read more on Derek Thomas and his activities here.
Posted by Save the Holy Headland at 15:23 No comments: