Derek Thomas has voted for substantial cuts in Attendance Allowance - the money given to disabled people to help them survive.  In essence, this will make it extremely difficult for many disabled people to live.  Without money to pay carers, how can those who need care be properly looked after?  It boils down to this:  the Conservative Party truly represents only the most rich and powerful in society.  They represent a pitiless class of people who are cushioned from life's vicissitudes by their money - if they need the help of nurses or carers they simply buy it.  Unless you are in this super-wealthy social group, the Tories do not represent you.  Their myth is that we can all join the elite and become ultra-rich, but the reality is that there isn't room for everyone at the top of the capitalist pyramid and that's why most of us need the National Health Service, and disabled people living at home, trying to maintain a measure of independence do not need to have their slender means of support hacked away by a reactionary government of millionaires. 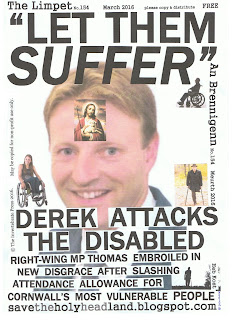 Derek Thomas, Member of Parliament for West Cornwall, is a man who poses as a Christian, yet his actions would drive even the Prince of Peace to wrath.  If you want to measure an MP, you must look at their voting record.  Derek is a man who is eager to climb the demonic ladder of promotion within The Party, and therefore, despite his 'Christianity', is quite happy to go along with absolutely anything his masters propose.  He is basically just a sort of dehumanized extension to David Camoron's monumental and despotic ego.  A man cannot follow two masters - you cannot follow the teachings of Jesus and practice the policies of Camoron - the two are as incompatible as water and fire.  It seems to have escaped Derek Thomas' awareness that Jesus was particularly famous for going out of his way to look after the poor and humble, the lame and blind.  He was also a well-known socialist who told us to share our wealth and help each other, whilst castigating the wealthy-class for their greed, callousness and venality.
If you write to Derek Thomas to seek representation, do not expect a reply - he is far too important to earn his pay and actually respond.  But remember, the next time a disabled person dies alone in their home, soaked in their own piss, because they could not afford the most basic help, under a government that has commodified 'care' and put it up for sale - this was the result of the policy of Derek 'Christian' Thomas and his dark masters in the party of greed, violence and inhumanity.
Amen.
-----------------------------------------
What Derek has been up to:
http://www.theyworkforyou.com/mp/25440/derek_thomas/st_ives

IS DEREK THOMAS LYING ABOUT HIS LANDLORD STATUS?
http://www.cornishman.co.uk/Letters-January-16-2016/story-28512648-detail/story.html


Ian Duncan-Smith finally gets cheesed off with being called an inhuman monster and calls it a day, making way for the next inhuman monster to jump into his snake-skin shoes...
http://savetheholyheadland.blogspot.co.uk/2013/03/the-many-moods-of-ian-duncan-smith.html