When I heard that Albert Woodfox had just been released from 43 years of solitary confinement in ‘Angola’, the Louisiana State Penitentiary, I expected to see a broken wreck of a man emerge.  What I saw, as I watched Albert Woodfox’s first interview after regaining his freedom, was a man who emanated an incredible strength, clarity and wisdom.  Forty three years in a 6 foot by 9 foot cell – that’s approximately 2m x 3m.  Twenty three hours a day with one hour for exercise, alone.
It’s very hard not to see the State of Louisiana as a fascist state when you look into the case of the ‘Angola 3’ -  black men framed for a murder because they dared to organize a chapter of the Black Panther Party to struggle for basic Human Rights within ‘Angola’, a vast former cotton plantation where thousands of black slaves from Africa were tortured and worked to death.
What sustained Albert during 43 years of cruel and unusual punishment, or ‘torture’ as the UN defined his treatment?  What shines through in the interview is an easily-available but little used form of power – revolutionary zeal.  Albert spent his time reading politics and history and developing a revolutionary consciousness – which is what any lover of democracy and justice can potentially do, only most of us never do so unless our back is against the wall.
The Black Panther Party was formed as a reaction to police-brutality and murder in the USA.  Taking inspiration from anti-colonialist and revolutionary liberation movements the world over, the Panthers also specialized in free-breakfast clubs for ghetto kids.  Many BPP members were murdered by police, many more still languish in jail decades later.  Formed to protect the African-American people from state-violence, the Panthers are needed now more than ever, as police-murder in the USA is spiralling out of control, evinced by the genesis of the Black Lives Matter movement.  Back in the late sixties, slogans such as 'Self-Defence is No Offence' and 'Power to the People' were not just an expression of radical defiance by the black community in the face of overwhelming state-oppression;  they were an expression of the fundamental values of the American Democracy, which, when we pause to recollect our history, was a democracy founded on the principals of Revolutionary Liberty. 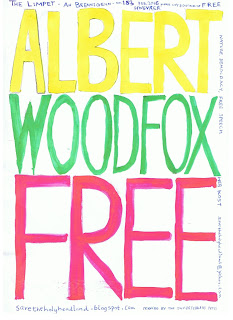 A list of 19 ‘Justifiable Homicides’ of Black Panthers by Amerikan police:
http://savetheholyheadland.blogspot.co.uk/2009/01/save-holy-headland-welcomes-obama.html

A 'FREE ALBERT WOODFOX' poster made in Cornwall, UK, 2015, plus a documentary on the state-murder of Fred Hampton:
http://savetheholyheadland.blogspot.co.uk/2015/02/free-albert-woodfox.html

CHEN GUANGCHENG   -
Human Rights in China:   Please listen to this amazing story that will help you understand the harrowing reality of life in China:

Petition to save Tibetan from torture in Chinese prison:
http://www.freeshokjang.org/

All Power To The People
Posted by Save the Holy Headland at 05:56 No comments: