Thank you for contacting me about the Hunting Act 2004. I appreciate the strong feelings that many people have on this issue and I am fully supportive of legislation to ensure the welfare of all animals. I do not, however, believe the Hunting Act has done anything for animal welfare. At present I do not know how, or when, the Government intends to address the hunting question but I would like to see the matter resolved, as it should have been originally, on the basis of principle and evidence and not prejudice.

The Hunting Act was passed in 2004 after a Government Inquiry and 700 hours of parliamentary debate. There was never any evidence to justify a ban on hunting and the Chairman of the Inquiry, Lord Burns, said during a debate on the Bill: "Naturally, people ask whether we were implying that hunting is cruel... The short answer to that question is no. There was not sufficient verifiable evidence or data safely to reach views about cruelty."

Professors Sir John Marsh and Michael Winter, members of the Burns Inquiry team wrote to the then Secretary of State for Environment, Food and Rural Affairs in 2005 stating: “I would like to draw your attention to Lord Burn’s comment that the committee did not have sufficient evidence to reach a clear conclusion on whether hunting involves significantly worse welfare effects than other legal methods of control…Describing as we did the final moments of a hunt as ‘seriously compromising the welfare of the hunted animal’ should not be taken as a suggestion that hunting was measurably worse than other legal methods, or that abolition would improve the plight of wild animals in the countryside.”

A Veterinary Opinion on Hunting with Hounds, supported by over 560 members of the Royal College of Veterinary Surgeons states that: “Hunting with hounds is the natural and most humane method of managing and controlling foxes, hares, deer and mink in the countryside”.  This opinion was reached after careful consideration of all the various methods of control and their implications for the wild animal. It is notable that four former senior executives of the League AgainstCruel Sports have all changed their minds about hunting having looked at the facts. James Barrington, ex-Director League Against Cruel Sports has stated: “The Hunting Act, instead of improving animal welfare, has actually made it worse and a detailed analysis of this law reveals illogical and unprincipled conditions that in no way can be argued as welfare-friendly.”

Moreover, 97% of successful prosecutions under the Hunting Act were unrelated to regulated hunting and could have been prosecuted under legislation in place long before the Hunting Act was passed.

Given the fact that the Act has done nothing for animal welfare, I would welcome an opportunity to see this matter sensibly resolved once and for all, with which I am sure you would agree.  I, along with the courts, police and many welfare experts, believe good legislation should be based on principle and evidence and the Hunting Act fails to meet these criteria.

According to your logic, countries which use the firing squad as a method of execution, should instead chase the condemned over miles of country with a pack of dogs, before letting said dogs tear him to pieces - anyone can see that this is more humane...

I wonder if you have any more respect for Human Rights than you do for those of Animals.  I'm looking forward to your reply to my letter of 13th May 2015, regarding the Human Rights Act.
Sincerely,  Jeremy Schanche"

When you are the temporary mouthpiece for a party that represents the interests of the Reactionary Classes, you must support the predelictions of your Masters, whatsoever they be.  This being so, it can hardly be surprising that Derek Thomas, as a Greenhorn politician, would rush to fulfil the barbaric and perverse wishes of his bloated, greed-blinded Masters.

Perhaps after unwinding the last twitching inch of entrail from the broken carcass of a convulsing fox and twirling it round his head in an ecstasy of barbaric lust, he will fall to his knees and thank the Lord for all things bright and beautiful, all creatures great and small.

The League Against Cruel Sports

Posted by Save the Holy Headland at 05:31 No comments:

Don’t let the sinister tory party destroy our fundamental Rights and fob us off with ‘Human-Rights-Lite’.  Once lost, our basic rights would be extremely difficult to reinstate.  Take action now – sign the petitions and share them around.  Write to your MP and express your thoughts.  Print out this 'Defend Human Rights' poster and display it where it can be seen.  Show your solidarity for the Rights that underpin our very civilization!   If ever  a cause mattered this is it! 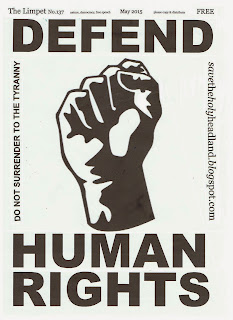 Scrapping the Human Rights Act could bring return of ‘troubles’ to Ulster
http://www.theguardian.com/uk-news/2015/may/12/scrapping-human-rights-act-would-breach-good-friday-agreement

Stand up for Justice for Kingsley Burrell, another black man dead after being ‘policed’

United Friends and Families Campaign – For the loved ones of police/custody-death victims
http://www.uffc-campaigncentral.net/

Beam us up, Scottie, we cannae take any more!
https://www.change.org/p/the-uk-government-allow-the-north-of-england-to-secede-from-the-uk-and-join-scotland

Update on ‘Justice for Kaleb’ Campaign

Camoron “will not be lecturing or hectoring the Chinese on Human Rights”, having “drawn a line under Tibet” – but YOU can still help these people struggle for their basic rights, the very rights that are under threat in Britain from the reactionary forces of conservatism.


It's going to take more than just signing petitions, it's going to take a lot of citizen-activism...
Defend Human Rights - it's up to you.....
Posted by Save the Holy Headland at 16:05 No comments:

These are our Rights:

This is what we fought World War Two for.  Will Derek Thomas, West Cornwall’s new Member of Parliament stand up and defend these rights, or will he betray civilization?  Welcome to the Moral Crossroads, folks – which way are you going? 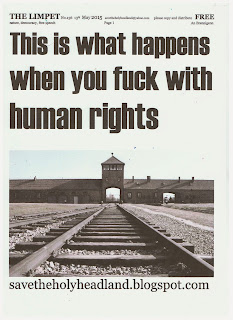 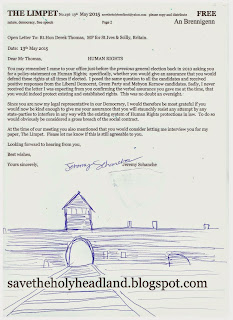 Please print out some of these flyers and help publicize the petitions protecting Human Rights - thanks. 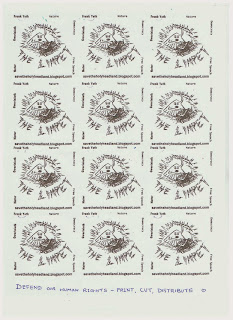 Here’s what you need to know about the Human Rights Act:

Petition for Referendum on tory’s proposed abolition of The Human Rights Act in Great Britain
https://www.change.org/p/david-cameron-mp-we-call-on-the-government-and-the-prime-minister-to-provide-a-national-referendum-on-the-planned-abolition-of-the-human-rights-act?utm_source=auto_update&utm_campaign=verified_tweet&utm_medium=email&tk=quygkQ7UBwCyTAHEkZE6uq2q-mTOXBrqv0qMWvEmu2I


“…I will not cease from mental fight,
Nor shall my sword sleep in my hand…”
William Blake

Posted by Save the Holy Headland at 07:11 No comments:

Email ThisBlogThis!Share to TwitterShare to FacebookShare to Pinterest
Labels: Conservative, Cornish Masons, cornwall, Derek Thomas, ECHR, Human Rights, samizdat, St.Buryan, St.Ives, The Limpet 136, The Right to Life, This is what happens when you fuck with Human Rights, Tory

Camoron’s first step as reinstalled Prime Minister of Britannia is his proposition to strip us Brits of our Human Rights.  This includes the Right to Life, Justice, Freedom from Torture, Access to Legal Representation, and such trivialities.
His next move is an attack on Workers Right to Strike.
Derek Thomas, our Member of Parliament for West Cornwall will oversee the dehumanisation of Rights in Kernow.  Is it 2015… or 1933? These Bullingdon Boys need to be stopped.  If you care about Democracy & Liberty now is the time to commit yourself to the Anti-Tory-Movement. 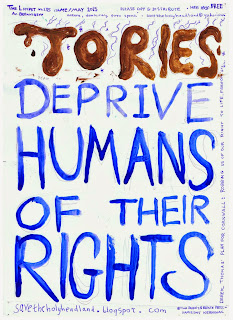 The Universal Declaration of Human Rights

The European Convention on Human Rights

Save The Life of Mary Jane Veloso
https://www.change.org/p/indonesian-pres-joko-widodo-jokowi-do2-save-the-life-of-human-trafficking-victim-mary-jane-veloso?utm_source=action_alert&utm_medium=email&utm_campaign=302209&alert_id=CeYVFYVTfj_Wj%2BdlRvH%2FOLIG5YVg6IqeHyDDLDk8RUW%2FcuSiTVpwtvIgh1xKt1%2BBo7qVebI9dRw

Let The Hungry Be Fed
https://www.change.org/p/rescind-the-cruel-anti-homeless-feeding-bans/sign?utm_source=action_alert&utm_medium=email&utm_campaign=304753&alert_id=vPmEtghoLN_qi0I7R2BO9tDv6gJB3Mj9cwJOSleGVOk7acKdhaD888%3D

Organize!  (A playlist for social liberation.)

The National Health service and the Welfare State have come to be used as interchangeable terms, and in the mouths of some people as terms of reproach. Why this is so it is not difficult to understand, if you view everything from the angle of a strictly individualistic competitive society. A free health service is pure Socialism and as such it is opposed to the hedonism of capitalist society.

—Aneurin Bevan, ‘In Place of Fear’

Posted by Save the Holy Headland at 04:27 No comments: