Take out some advertising space in The Limpet, it works for leading brands like Sainsburys, Taser International and the Penzance Chamber of Commerce… 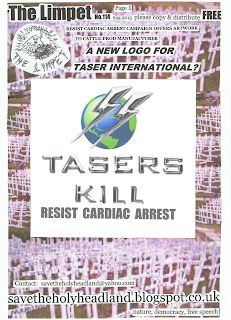 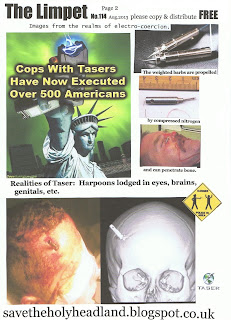 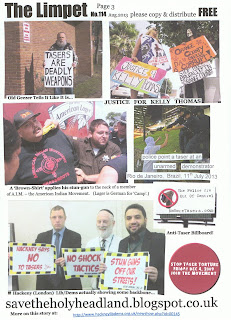 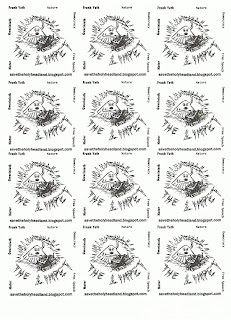 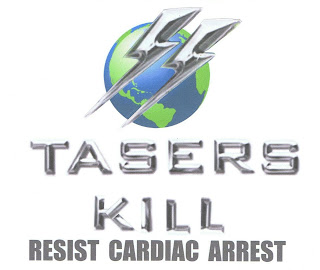 Emergency Medicine Journal article on effects of electricity on Human Body. (From  the summary:  It is worth remembering that the Advanced Taser is to be used only as an alternative to firearms and any outcome measures should be considered in this context.):
http://emj.bmj.com/content/21/2/136.full

U.S. Military Police using tasers on Iraqi prisoners of war:  This document states that taser-use is second in the “continuum of force”, after verbal commands.  This means that if you do not comply instantly with the U.S. military, you are electrocuted:  Pain-Compliance, or Electro-Coercion in action:
http://www.docstoc.com/docs/48574832/The-TASER-M26-in-Operation-Iraqi-Freedom

An example of the Taser International Company corrupting the medical profession:
http://www.thepetitionsite.com/2/johns-hopkins-hospital-stop-supporting-taser-use/

San Fransisco Bay Area Regional Transport cops:
"There were also concerns over the fact that the target was a minor and that the officer deploying the Taser was a supervisor.
The BART police officer who improperly fired the Taser is still on duty and has not been disciplined as the internal investigation into the incident continues."
http://www.ktvu.com/news/news/exclusive-bart-police-ordered-to-turn-in-tasers/nKtWx/

“The Adelaide case occurred too late to be included in a secret analysis by The Alfred hospital on Taser safety carried out for Victoria Police, which began using the stun guns operationally in November.    The Age revealed on Monday that The Alfred analysis warned that Tasers posed "immediate risks and potentially fatal dangers"
http://www.theage.com.au/news/National/Concerns-over-safety-of-Taser-stun-guns/2005/04/19/1113854203255.html

http://vtdigger.org/2013/03/12/disability-advocate-criticizes-troubling-pattern-of-taser-misuse/
Democracy!
"But in Montpelier, the City Council rejected a request from the Montpelier police chief and the city manager for permission to deploy tasers. After examining tasers at length, a citizen committee recommended against the weapons, deeming them unnecessary and potentially dangerous."
- See more at: http://vtdigger.org/2013/03/12/disability-advocate-criticizes-troubling-pattern-of-taser-misuse/#sthash.WrwfnZpY.dpuf

200 Children tasered by Britpol,  6 drive-stunned (cattle-prod mode)  (Probably at least twice that, as around half of Britain’s constabularies (including Devon & Cornwall) failed to respond to Freedom of Information Requests:  (The Daily Mail is a disreputable right-wing rag, however, it is worth noting what the police told them about using stun-guns on children.)
http://www.dailymail.co.uk/news/article-2334750/Police-shot-children-young-12-50-000-volt-Taser-linked-causing-fatal-heart-attacks.html
“A total of 27 forces provided responses on the use of Tasers against children during 2010, 2011 and 2012. But the true figure of Taser use on young children is likely to be much higher.”

Police brutality / Blackshirt gassings in the streets of Britain:

LOCAL NEWS FOR PENZANCE, CORNWALL:
As Corwnall’s Corrupt Council sells out to Big-Business, a vast new  Sainsburys supermarket is appearing on the outskirts of Penzance, lurking like an ogre at the edge of town, waiting to take everybody’s money before they even get to the town.  This is very bad news for the small shops and traders of Penzance, but there is a way you can fight back against the arrogant march of virulent capitalism – follow the links below and take the pledge:
BOYCOTT SAINSBURYS!
http://www.demotix.com/news/1242551/pay-campaign-holds-protests-sainsburys-london#media-1242535
http://www.payup.org.uk/

http://www.payup.org.uk/
Posted by Save the Holy Headland at 02:47 No comments: