May All Beings Have Happiness...

http://www.youtube.com/user/floydyopz
Posted by Save the Holy Headland at 15:40 No comments:

PEN MINUS ZANCE EQUALS WHAT?

Centuries after these descriptive primitive names were given, Moeshayle* became the market-town of the west, when few, if any other, buildings were in what is now Penzance, except the small chapel or oratory on the rocks, which acquired for the projecting cairn the name of Penzance (holy headland)
William Bottrell, 1870
* Mousehole 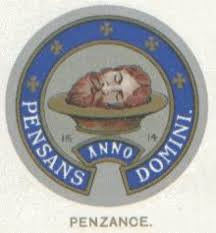 See below the response from Cornwall Council, when asked what they have done with the remains of our ancient chapel, the first building in Penzance - the building that put the 'Zance' into the 'Pen'.
Reference Number: IAR-003878
Response provided under: Freedom of Information Act 2000
Request and Response:
I would like to know the following:
1) Who gave the order to remove three extremely large pieces of stone from the dark-ages site of St.Anthony's Chapel, , , August '09?
2) On what date was the order given?
3) To whom was the order given?
4) Where are these three extremely large pieces of masonry now?
5) What plans exist for the future of St.Anthony's Chapel site?
6) To date, are there any plans to consult the public about their wishes concerning the most ancient religious site in ?
1 No idea – not sure that the alleged stones ever existed
2 No details exist
3 No details
4 No idea - See answer 1
5 No change to existing site is planned to date
6 See 5 no plans to change anything as far as I am aware
Information provided by: Environment Service - - - - - - - - - - - - - - - - - - -

Since the reply I recieved on 13th December 2010 was totally evasive and unsatisfactory, I am now forced to ask the following:

1) who composed the reply from the Environment Service? Who issued the reply to me? In future I request that all letters be signed - is this not normal procedure?

2) Has the council any juristiction or authority over the piece of ground, currently being used as a car-park, between the old Vospers building and Barbican Lane, including the site of St.Anthony's Chapel?

3) Has the council ever taken any action whatsoever, on or concerning the above territory? If so, please specify ALL actions taken by the council regarding this territory.

4) Is the author of the previous reply to me, representing the Council, prepared to state categorically that he (Mr Marks?) or she, having asked all or any persons who are now, or have been in the past, concerned with this matter, and having consulted all relevant files; that the council has definitely not removed any stones from this site? (Bearing in mind that I have a letter from Mr Alec Robertson refering to stones being removed from the site which has been published on the internet)

5) Re: your answer No.2) "No details exist": Are you - or any of your colleagues - claiming that the details have been (a) destroyed? (b) supressed?

6) Also RE; Your answer No.2: Are you claiming that no such order was ever issued?

7) Re: Your answer No.3) (a) Are you claiming that the order was never recieved? (b) Or that the details of that order have been destroyed? (c) Or is it a simple refusal to provide the information?

I wish to complain about the above reply to my request for information on the whereabouts of three stones, weighing several tons, that were removed from the site of St.Anthony's Chapel, Barbican Lane Penzance, in August 2009. By reading the relevant documentation you can plainly see that my enquiry has been evaded and no satisfactory information given to me whatsoever. I would be very grateful if you would facilitate the genuine flow of information on this matter of considerable cultural, religious and historical importance.
Thank you very much.
Sincerely, Jeremy Schanche 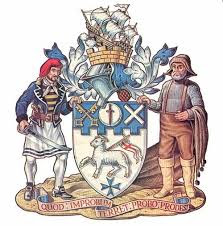 Posted by Save the Holy Headland at 14:50 No comments:

WHERE ARE THE STONES, ALEC ROBERTSON? 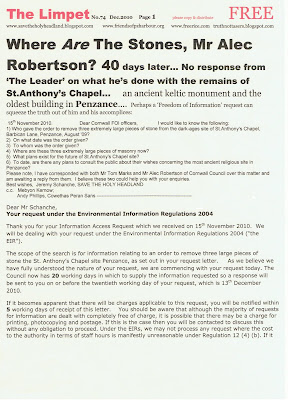 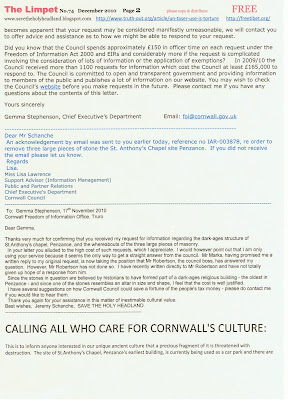 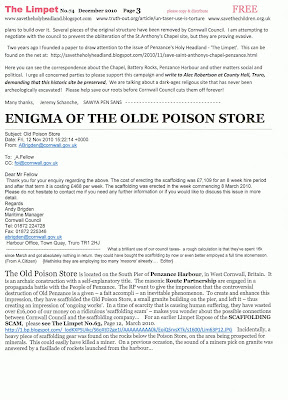 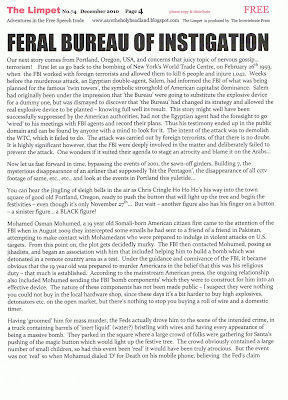 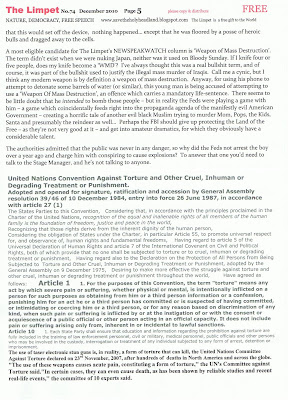 Scaffolding scam: http://1.bp.blogspot.com/_lodKXPSUikc/S6oXtD2ge1I/AAAAAAAAA0k/EoiQSrvsXTk/s1600/Lim63P12.JPG
FULL TEXT OF UNITED NATIONS CONVENTION AGAINST TORTURE – SIGNED BY BRITAIN IN 1985:
http://www2.ohchr.org/english/law/cat.htm
( Note how it says “ENGLISH LAW” )
UN defines use of taser as ‘a form of torture’: http://www.truth-out.org/article/un-taser-use-is-torture
RESIST CARDIAC ARREST: http://savetheholyheadland.blogspot.com/2010/02/test-do-not-publish.html
Analysis of press reports from ‘The Cornishman’ (Daily Mirror Group):
21st July 2010: INNOCENT MAN TORTURED BY POLICE WITH TASER SHOT TO ‘GROIN’. Note that it is not possible to comment on this article on the website – ask yourself why. The police claim this incident was an ‘accident’. Mr Cox was unarmed, peaceable and breaking no laws whatsoever. Upon electrocution, Mr Cox, who had recently had a knee-cap replacement, sustained secondary injuries to his elbow and leg when neuro-muscular incapacitation caused him to loose control of his skeletal muscles and drop to the ground in intense pain and suffering. He then had to await the arrival of paramedics to remove the barbed prongs from his genital area and ankle:
http://www.thisiscornwall.co.uk/news/Innocent-Taser-victim-thinking-suing-police/article-2438130-detail/article.html http://www.november.org/stayinfo/breaking09/Taser_Genitals.html
UNARMED MAN TORTURED FOR BEING ‘VERBALLY AGGRESSIVE & THREATENING’ This incident appears to have occurred in late November 2010, in Newbridge. After torture, the man was accused of a ‘public order offence’ – a kind of Orwellian Catch-All which never seems to be explained in the press. Unless he was familiar with international law, the ‘public order offender’ will not have realized that he underwent torture – although his nervous system might have reached that legal position spontaneously… :
http://www.thisiscornwall.co.uk/news/Police-deploy-Taser-house/article-2956286-detail/article.html
HEROIC POLICEMAN MACES UNARMED MAN, MACES HIMSELF, GETS TORTURED BY ANOTHER COP ETC.ETC.
9th September 2010: This Is Cornwall Website: This one is rather rich. The Mail Group left some inconsistencies in their reporting of this tale of the ‘Battle of the Jasons’. They claim that ‘Baddie’ Jason charged again – but did not claim he had ‘charged’ a first time. They use the phrase ‘gassed’ to describe the action of the chemical weapon that is now commonly used by police in action, namely the vapourized juice of chilli-peppers that is routinely sprayed into the faces of unarmed people who have not attacked the police. Also, is it normal to go from ‘desperately reasoning’ with someone, to ‘gassing’ them – without first trying to apprehend them?
http://www.thisiscornwall.co.uk/news/Gassed-shot-punched-8211-heroic-PC-gets-man/article-2617623-detail/article.html Check the comments on this one:
http://www.thisiscornwall.co.uk/news/Policeman-scary-Friday-13th/article-2628404-detail/article.html?cacheBust=oMPy6Q4gh0Pb&success=true#community Amusing?
STREET HASSLE: cops taser-torture and mace unarmed man…..
NEWSPEAKWATCH: ‘CAPTOR SPRAY’ = CHEMICAL WEAPON = CHILLI JUICE IN THE FACE.
http://www.thisiscornwall.co.uk/news/Police-used-Taser-runaway/article-2333179-detail/article.html
Article describes taser as ‘officer protection’:
(No mention of the UN, torture, over 500 corpses, or anything like that….):
http://beta.thisiscornwall.co.uk/news/Learn-police/article-2046734-detail/article.html
Article on electrical stunning to induce cardiac arrest in animals during slaughter:
If you follow the link above to the main blog-post entitled RESIST CARDIAC ARREST, you can read all about the history of electro-coercion, and how both the ECT (Electro-Convulsive ‘Therapy’) device and also the ‘taser’ device evolved from slaughter-house technology which goes back to the early twentieth century. Both these devices have been used to systematically torture people to Death by American military and CIA in both Viet Nam and Abu Grahib, Iraq, during ‘Operation Iraqi Freedom’.
http://www.grandin.com/humane/cardiac.arrest.html
On a happier note: How about ordering some nice clothes for Christmas?
http://www.apparelshopping.org/resist-cardiac-arrest.html
Twitter Ye Not! http://twitter.com/bindymedia/status/5297573367652352
Face-Book: http://www.facebook.com/photo.php?pid=1264961&id=31673916395 (Palden Gyatso)
More Face-Book: http://www.facebook.com/TAZEDthemovie?ref=mf
http://bristol.indymedia.org/article/699788
RCA Flyers: Please print and distribute some of these if you are concerned by what you have learned here and wish to do your bit in opposing torture and upholding the UNCAT:
http://2.bp.blogspot.com/_lodKXPSUikc/TN3M_RTta5I/AAAAAAAAA7c/X_4vDJQAJJY/s1600/NewRCA.JPG
THE FOLLOWING TWO SITES WERE SET UP BY PEOPLE WHO HAVE LOST LOVED ONES AS A RESULT OF TASER-TORTURE: Fancy a MYOTRON? Tasers in Yemen, Saudi Arabia, etc.: http://truthnottasers.blogspot.com/search/label/air%20taser
http://www.preventdangerousharm.com/
Dziekanski Movie (Unarmed man tasered to Death by Canadian cops): http://www.utopiapictures.com/tazed.html
www.friendsofpzharbour.org Check THIS out!!!! http://www.freerice.com/
http://freetibet.org/ www.savethechildren.org.uk http://againstpoliceviolence.blogspot.com/
http://www.injusticefilm.co.uk/ http://www.inquest.org.uk/
http://www.fitwatch.org.uk/ http://www.iantomlinsonfamilycampaign.org.uk/
‘POSITIONAL ASPHIXIA’: Man squashed to death by Home Office guards on plane. For more on this horrible tale, google Jimmy Mubenga, Flight 77, Heathrow, Deportation, 18th October 2010.
POSITIONAL ASPHIXIA? Did cops crush life-breath from young black man? : http://againstpoliceviolence.blogspot.com/2010/09/inquest-man-dies-after-being-restrained.html
CVMBUIN UICUMQ ENITHI
FO P C
REGIS RICATI CRUX IN PRAISE OF PENZANCE Whatever Market Jew pretends, Upon some musty old record, For noblest hearts and truest friends, Penzance shall ever have my word; No little town of like account, On this side nor beyond the Mount.
Thomas Freeman, 1614.
www.youtube.com/user/floydyopz

Please follow the link to read The History of St.Anthony's Chapel, Penzance:
http://savetheholyheadland.blogspot.co.uk/2013/01/history-of-stanthonys-chapel-penzance.html
Posted by Save the Holy Headland at 05:29 No comments: