The Secret Life of Arabia

Let’s look at some facts:   Saudi Arabia is an Islamic State.  Religion is compulsory, on pain of death.  ‘Religious Police’ enforce Sharia law.   Those accused of crimes have no recourse to due process of law.  The accused have no right to a lawyer or any other rights and are frequently whipped or beheaded (by sword or guillotine) without being charged at all.  Without due process of law, it can never be established whether the accused were guilty or innocent, therefore any trial in Saudi is improper and irrelevant to the cause of justice.  Although Saudi is alleging that many of the fifty or so  people scheduled for  mass-beheading are ‘terrorists’, this term is used very loosely.  Without a proper trial, it cannot even be established whether the accused are, in reality, guilty of committing an offense.  Saudi Arabia makes it very easy for Islamist terror-groups to raise funds within their country.   Saudi Arabia is currently bombing the Yemmen, using British war-planes.  The Saudi ‘royalty’ have for a long time been very good friends with the British ‘royalty’  who always invite them to Buck House for a slap-up feed whenever they are in town.  David Camoron and his reactionary tory monster raving loonies are very keen to pursue and cultivate the ‘special relationship’ with Saudi, as the Saudis are keen to spend millions of pounds on British weaponry with which to oppress their own people.  In a particularly sordid secret deal, the British ‘authorities’recently voted a Saudi onto the UN Human Rights panel – surely one of the most cynical acts of betrayal in modern history.   So, if you agree with David Camoron, and think that our country should be close friends with those Arabs who behead teenage poets in the street and nail their lifeless cadavers to crosses, just keep on voting for the Conservative Party of Britain.  And as the blades fall on the necks of trembling, innocent young people and the blood splashes into the dust, take comfort in the fact that it’s all done with the approval of David Camoron, Elizabeth Windsor, the British Ministry of  Defence and large swathes of the ‘establishment’.
Let us remember also that much of European culture is based on Arabic learning.  Mathematics, Astronomy, Music, Philosophy…  Our numerals come from Arabia, as do many of our words, such as ‘good’ and ‘man’.  I want to make it clear that I am not against Arabia, just the Saudi regime and its tragic bloodlust. 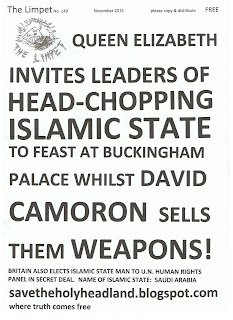 
Conservative Class-War offensive against the poor:  a cynical and anti-Democratic drive to DIS-enfranchise the least powerful members of society:  I bet they got the idea off the Yanks, who are, in States like Alabama, systematically disenfranchising the blacks.
http://www.hopenothate.org.uk/voter-registration-report/

Philip Davies: Enemy of the People:
http://www.independent.co.uk/news/uk/politics/tory-mps-block-bill-to-give-first-aid-training-to-children-by-talking-until-time-runs-out-a6742251.html
Look at the Tories laughing…

And finally, let's take a look at the 'land of the free and home of the brave', yup, I'm talking about Amerikay:

Posted by Save the Holy Headland at 09:00 No comments:

Thank you for your emails. I have read your online contribution to political debate and judged that anything I write will only be used in a negative and provocative manner.
I have been intending to visit you in person as I am more than willing to discuss the issues you are concerned about.
However, I am not prepared to do an interview for the Limpet.
How do you suggest we progress from here?
Kind regards
Derek Thomas
Member of Parliament for St Ives
-----------------------------------
Open letter to Derek Thomas, MP  9.11.15
Dear Derek,
Thank you for replying to me.  It’s a shame you only do so after I publicly accuse you of dereliction of duty, but still, it’s a start.
What you have seen on my website is not political debate, it is propaganda.  Debate is when two or more minds meet in free discussion.  I engage in  propaganda because I believe the Conservative Party represents forces that are counterproductive to human happiness, justice and progress.  When I first met you five years ago I told you I was a Human Rights activist and that hasn’t changed.  I also told you then that I did not like your party, and that has not changed either.   At that meeting you agreed to an interview with me and you agreed again, in public, earlier this year, so changing your mind about the interview, it’s not very honest, is it?  When I do an interview, I print verbatim every word said by both parties.  That’s the way I did it with UKIP - I don’t like their policies one bit, but I’m not going to misrepresent them.  When I interview, both parties are at liberty to record the conversation, therefore both parties can prove what was said.  All very simple.  Therefore, if I did interview you, it would be on those same, mutually fair terms.
I am glad that you are willing to meet me and discuss the various issues I have written to you about since you took office six months ago.  This might be quite time-consuming, as the issues keep accumulating over the months.  Fox-hunting, the Human Rights Act, extra-judicial killings of British citizens, etc.  these are all matters of life and death that require deep investigation and cannot simply be glossed over with a few vague or superficial phrases.
Since the topics I would wish to discuss with you are legal topics, I would want to record the entire conversation, as obviously I would need hard evidence of your position in law.  An unrecorded verbal exchange has no legal value to me.
As a long-time Free Speech activist, who happens to be a citizen-journalist, I always publish my exchanges with officialdom, whether it be politicians, police, civil-servants, the UN, whomsoever it may be.  Therefore, if we have a meeting and a verbal discussion on domestic and international law, I will record and publish our discussion.  My outlet for such activities is ‘The Limpet’, so that is where it will be published.
It seems to me that you are backing away from communicating with me because you know that I am anti-Tory, articulate and politically engaged.  As a politician, you should be able to better me in debate - if your arguments have any substance.  But it seems to me that whereas the left wing originated as a popular movement to secure a better life for the mass of people, the only purpose and ideology of the right wing is to concentrate power and wealth in a very few hands, at the expense of wholesale misery and exploitation for everyone else.
Power to the people.
Best wishes, Jeremy Schanche
Posted by Save the Holy Headland at 06:03 No comments:

“Do you really call this democracy” shouted the man, as three large thugs assaulted him and man-handled him out of the ‘public-meeting’ of Penzance Town Council.  His crime?  He exercised his free speech – he dared to ask a question.
There is no place for these hired thugs in our democracy, there is no need for them.  However, as long as the ‘democracy’ is in the hands of a few ‘authorities’,  and until there is large-scale participation by the public, then these outrages can be expected to continue.
In the tales collected by the Cornish collector and scribe William Bottrell, there are many fascinating insights into life in medieval Cornwall, when the Mayor of Penzance presided over criminal ‘trials’ and had the power to summarily hang people in the streets.  Some say that change is slow to come to the Shyre; perhaps this is why the current Mare of Penzance, David Nebesnuick, thinks it’s fine to hire a goon squad to stomp any opposition to his agenda.  Could this possibly be in any way connected to the revolting plan to sell-out the running of Penzance’s mid-summer ‘Golowan Festival’ to a private capitalist business entity?  This is the front-line of right-wing policy interfacing with the people.  Most of us do not want privatization, as we understand the principles and advantages of public ownership and control of public assets.  Mr Nebesnuick only feels it necessary to hide behind a goon-army of mercenary hired-thugs because he is a reactionary puppet of  International Capitalism, and as we all know, the First Law of Capitalism states quite clearly that MIGHT  IS  RIGHT.
Despite a petition with 493 signatures calling for the Mare of Penzance to gallop away, he is digging in his hooves and refusing to budge.
If you watch the video of the incident, the sad thing that you notice is the acquiescent and passive complacency of the public.  Nobody stands up to remonstrate with the bullies.  No-one objects, they don’t even seem to be looking.   Oh well, like the old saying says, ‘a nation of sheep  begets a government of wolves’…  time to grow a pair, perhaps?
MEANWHILE BACK IN ‘BURYAN….. we’ve got an ‘MP’ who goes around insulting the ill – this time he’s blaming people with diabetes, apparently he thinks it’s their own fault…  see link below…   Not only that, but whilst he fattens his jowls on 74,000 of our pounds per annum, he’s not prepared to answer his constituent’s letters.  So keep sending him those letters folks, an MP should be a man of letters.  Promote literacy in St.Buryan.
UP AT TRURO we find the Great Anarchist, Mr John Pollard, who whilst refusing to affirm the legality of his actions in the Treloyan fiasco (case), simultaneously holds the title of Portfolio Holder For Reputation And Performance (sick).
So you see, even down here in West Cornwall we have our fair share of VIP’s.  This month The Limpet has brought you just three of our local celebrities, just three of the reasons why my heart swells with pride when I think of our Great Democracy down here in the Shyre of West Cornwall.  Right on, my birds! 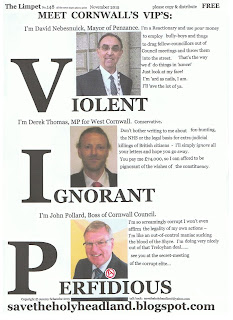