RCA: UNCAT in the UK!

RESIST CARDIAC ARREST challenges the Prime Minister, the Attorney General, 2 MP’s, IPCC, a Chief Constable, a Police Authority & a Superintendent on UN Convention Against Torture. The UNCAT is a body of legislation supposed to prevent acts of torture in civilized countries, but years after the UN defined taser use as torture, teenagers are still being electrocuted in the street – WHILST HANDCUFFED – ‘The Limpet’ asks WHY??
This issue is dedicated to the memory of Roger Holyfield of Illinois, aged 17, tasered to Death by ‘police’ for waving a Bible around in the street on the eve of his Baptism. Also dedicated to Brett Elder of Michigan, aged 15, and all the other teenagers murdered by thug cops with cattle prods… 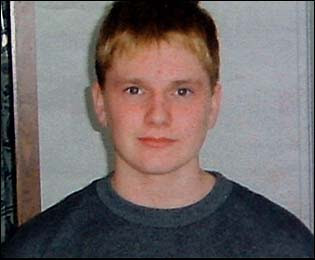 http://www.bollyn.com/death-by-taser-the-tragic-death-of-roger-holyfield
As the signs around Jerseyville say, "Jesus saves. Tasers kill. We love you Roger." 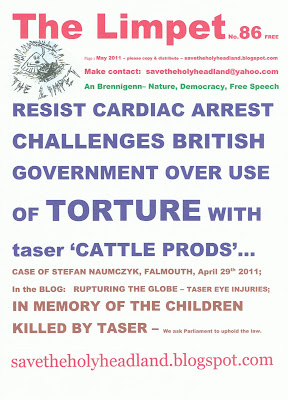 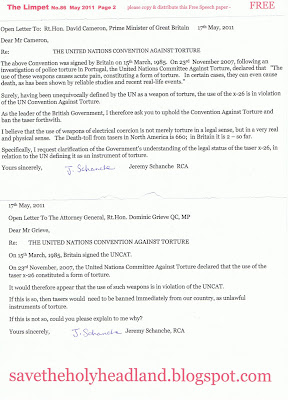 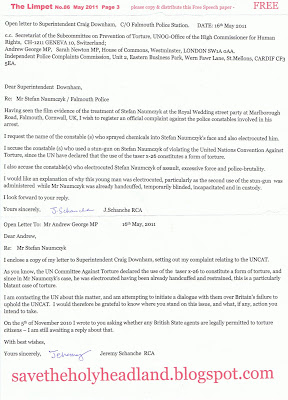 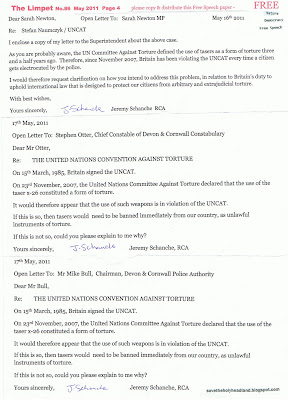 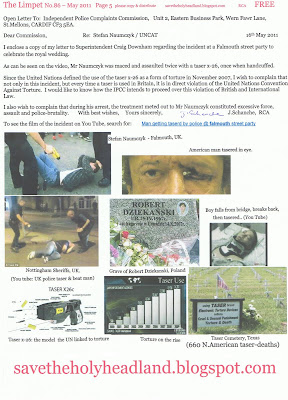 taser-dart in the eyeball - a gift from the law…
Taser to Enucleated OS from OphthalmologyWeb on Vimeo.
More on this case below… but first, let’s go to Falmouth, in West Cornwall, Britain, and take a look at what happened to a 19 year old man, who broke a bottle in the street at a party to celebrate Britain’s fairytale royal wedding
STEFAN NAUMCZYK (unarmed) – Maced in the face, electrocuted, cuffed then tasered again by British cops! 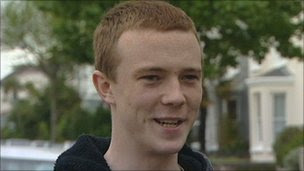 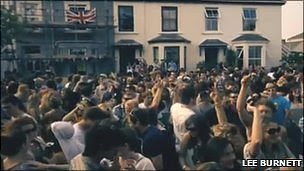 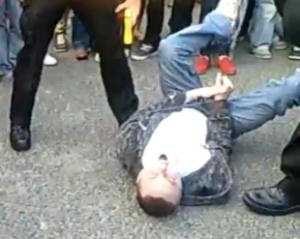 http://www.thisiscornwall.co.uk/news/Tasered-youth-accuses-heavy-handed-police/article-3543621-detail/article.html
http://tobyjanes.wordpress.com/2011/05/07/stefan-naumczyk-tasered-2/
http://www.falmouthpacket.co.uk/news/fpfalmouth/9019397.Watchdog_to_investigate__taser__arrest___with_VIDEO/
http://www.bbc.co.uk/news/uk-england-cornwall-13341052
http://www.bbc.co.uk/news/uk-england-cornwall-13277335
Falmouth Member of Parliament expresses no concern over Stefan Naumczyk:
http://www.trurofalmouthconservatives.co.uk/news/meeting-held-discuss-marlborough-road-street-party
Pete Seeger: We've Got Our Eyes On You.
Taser Eye Inuries
http://www.ncbi.nlm.nih.gov/pubmed/16764662
http://www.ajo.com/article/S0002-9394(04)01402-3/abstract
TASERS RUPTURE THE GLOBE….Case Report – American Prison Guards taser man in eyeball!
In 2008, a 49 year-old Hispanic male prison inmate presented to the ocular emergency room having been injured in his left orbit by a barbed taser dart after an altercation at his prison. This patient had previously been enucleated in his left eye. The dart had penetrated his left upper eyelid and entered the orbital implant.
Due to taser-abuse, an increasing number of facial and ocular injuries have been reported. An article in the Annals of Emergency Medicine in 1987 (Vol 16, pp. 73-78) found that the projectile darts from the taser device hit the face about 1% of the time.
There are 3 articles in the literature reporting on ocular injuries from taser weapons - in 2005 theAmerican Journal of Ophthalmology published a case report (Vol 139, pp. 713-715) of a 50 year-old man who was shot by a taser dart through his right lower eyelid that resulted in a ruptured globe injury. There was a second ruptured globe injury reported in Clinical and Experimental Ophthalmology In 2006 (Vol 34, pp. 378-380) of a 21 year-old man who was shot directly in the globe by a taser dart. Lastly, in 2007 a case was reported in the Journal of Cataract and Refractive Surgery (Vol 33, pp. 1664-1665) of a cataract caused by the electrical discharge from a taser dart.

Figure 3. External photograph of the patient after injury to the left upper eyelid and orbital prosthesis with a TASER dart.

Figure 4. External photograph of the patient after injury to the left upper eyelid and orbital prosthesis with a TASER dart.
X-rays and a CT scan confirmed the location of the TASER dart’s fish hook barb in the orbital implant

Figure 5. X-ray showing the TASER dart in the left orbit.

Figure 6. Axial CT scan showing the tip of the TASER barb in the orbital implant.
The patient was taken to the operating room where the taser dart was removed from his orbit under direct visualization and with a slow and steady application of force. The eyelid laceration was subsequently repaired and the patient recovered without complication.


The advent of taser devices has left a trail of corpses across Amerika. While facial injuries are rare with these devices, the result of an ocular injury is usually a ruptured globe. Fortunately in this case, the patient did not lose any ocular function because he had been previously enucleated. Furthermore, the patient made a full recovery without the need to replace his orbital implant. (In other words, if he hadn’t already had a plastic eyeball, he certainly would have needed one after being shot in the eye with an electric harpoon!)
Palm Beach taser-torture: http://www.palmbeachpost.com/news/content/news/video/taser_video3a.html
http://stuffwhitepeopledo.blogspot.com/2008/09/get-tasered-less-often.html 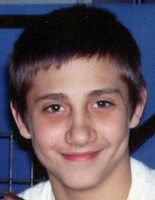 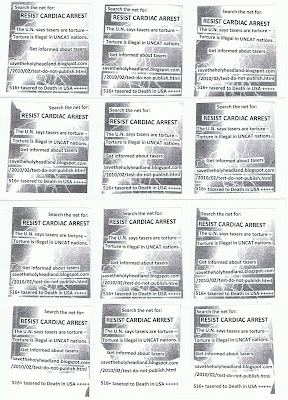 Please check out The Limpet No.53 for the inside story of electro-coercion:
http://savetheholyheadland.blogspot.com/2010/02/test-do-not-publish.html

Posted by Save the Holy Headland at 15:36 No comments:

The Limpet No.85:
Say No to Amerikan Torture Corporation Lockheed Martin, who deal in everything from ‘enhanced interrogation’, to processing the data from the 2011 British Census.

Do you work for the Water Board?

Tell us your religion so we can build you a road -

Tell us your job & we will build you a school -

Are you a Taoist? Have a nuclear power-station!

Our bus has octagonal wheels, no lights, no registration and is on the wrong side of the road

– that’s because it is an amerikan bus full of non-people, on their way to the camp. 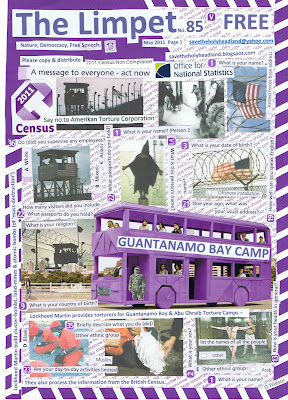 This article from the Sydney Morning Herald throws some light on conditions at Guantanamo Bay under the regime of Lockheed Martin’s military interrogators:

http://www.youtube.com/user/floydyopz?feature=mhum#p/c/E65C14C6ECCBA126/55/69y3s-ogK2Q
Όταν τελειώσει ο πόλεμος - Φαραντούρη, Θεοδωράκης
To Freedom
Posted by Save the Holy Headland at 16:33 No comments: