There are many people in prison in USA who by rights should not be there.  With a prison-population that has peaked at well-over two-million, Amerika has a nation within its own nation.  Among the very many people wrongfully incarcerated inside that nation, the case of Harold Hempstead stands out as an extreme story of injustice faced with incredible courage and humanity, which is why I've written many previous blogs on him at this site, and also work with Harold to run the website Harold Hempstead Caged Crusader Wordpress where I publish his evidence on human rights abuses in the Florida Department of Corrections and specifically on the case of the murder of mentally disturbed convict Darren Rainey.  What happened to Rainey was so evil that it catalyzed all sorts of people into action.  The case has dragged on for over five years now without satisfactory result as yet, but due to its gravity, I believe this murder will eventually receive the full international exposure it warrants.
I was talking to someone in a shop the other day and she randomly referred to the 'state of the world' with a sense of 'what can you do?'  I understood her feeling, and it certainly can be overwhelming to contemplate the daily flood of tragic, cynical and violent news stories.  My answer to her was that for anyone thinking of trying to take on the 'problems of this world,' you just had to pick a front and start fighting.
There are many ways you can fight for a better world for your children.  For anyone who does not know me, I use the word 'fighting' in the sense of struggle for a cause.  I'm no advocate of violence except in extreme cases of self-defense.  Planting a tree and raising it can help nature and reward you with a feeling that you could get no other way.  Befriending old folks and giving them a bit of help with their needs is always appreciated.  Some old folks are too proud to ask for the help they actually require, so a bit of tact is needed.  Some people round where I live like to organize Beach-Clean-Ups and get everyone out collecting the plastic and rubbish from our beautiful coast.   Someone in West Cornwall is organizing holiday accommodation for the people who lived at Grenfell Tower in West London and survived the traumatic and terrifying fire that destroyed so many lives and homes and perhaps signals the end of the tower-block as a 'housing-solution.'  Some people rescue animals and re-home them, others give their time to plant bee-attracting flowers in the park, now the corrupt local council has given up on planting them, citing the neo-con bullshit about 'austerity', whilst paying themselves handsome salaries.  So there is corruption and injustice and pollution everywhere around you if you care to open your eyes to it.  It's like tidying up a room - don't get bogged down in the totality of the mess, just start by picking up one thing and dealing with it.  Just pick a front and start fighting.
When he witnessed the brutal slaughter of Darren Rainey in a Florida prison torture-chamber, Harold Hempstead went through a long, dark night of the soul and came through it a changed man.  Trained from childhood by corrupt Miami police in espionage and evidence collecting, framed for witnessing against police crimes and sentenced to one hundred and sixty five years, Harold Hempstead had already endured over a decade in Florida's gulag, its production-line of death, when he witnessed the Rainey murder and, having made a deep commitment to Jesus Christ while in prison, Harold risked his life to witness, speak-out and testify to the numerous crimes of Florida's prison guards, staff and officials.
This website and Harold's own site will be continuing to publish more evidence on the Darren Rainey murder and other human rights issues in FDC, please follow and share this info, particularly with anyone you know who is politically active and working for justice.  With what's happening in the USA these days, Justice needs all the help it can get.  There's some people over there who take 'Justice For All' as their war-cry, and I salute their courage, energy and imagination with the deepest respect and admiration.  Many activists have had family members killed by police or prison-guards, or seriously violated in prison and they've had to stand up to intense intimidation from the Amerikan state and its machinery.  It's good to share information on facebook and sign petitions but it's also good to take it to the streets - after all, this world is ours, isn't it? 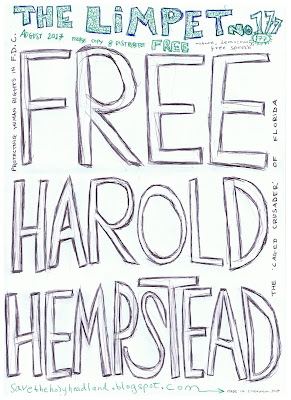 Posted by Save the Holy Headland at 18:15