Harold Hempstead’s been talking to the press about the murder and torture by guards he’s witnessed in Florida’s prisons - so they’ve withdrawn his medicines, put him on the wrong diet, stopped all his mail, taken away his legal documentation and put him in a cell with a rapist/murderer - all because he told the truth.  Please help him and help seek justice for those lost in the deathly Gulag of the Florida Department of Corrections. 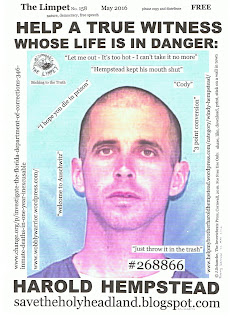