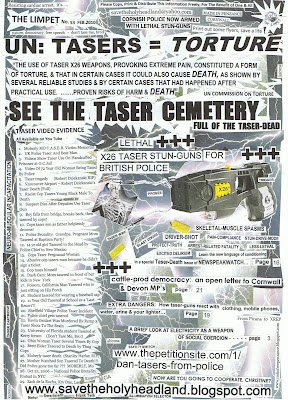 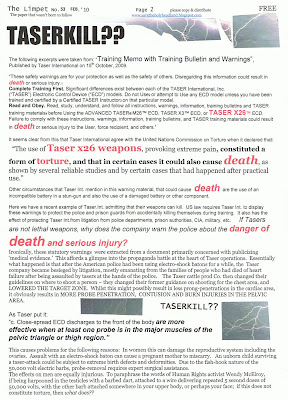 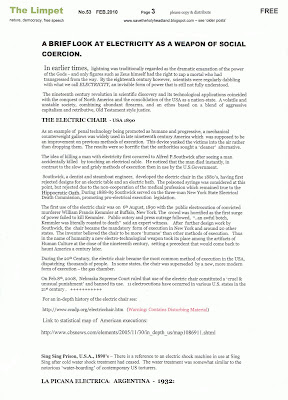 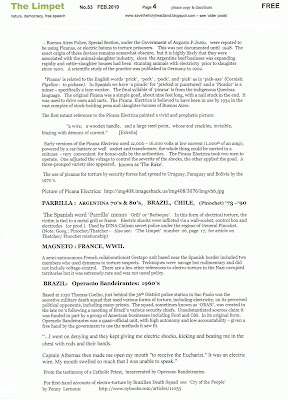 Picture of Picana Electrica http://img408.imageshack.us/img408/3076/imgvh6.jpg
For first-hand accounts of electro-torture by Brazilian Death Squad see ‘Cry of the People’ by Penny Lernoux: http://www.nybooks.com/articles/11053 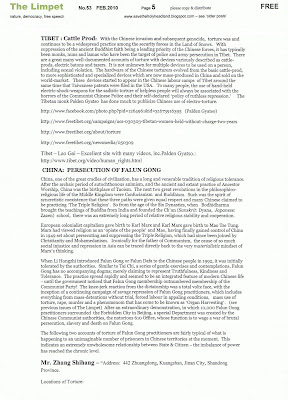 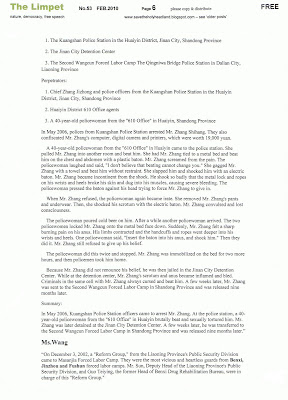 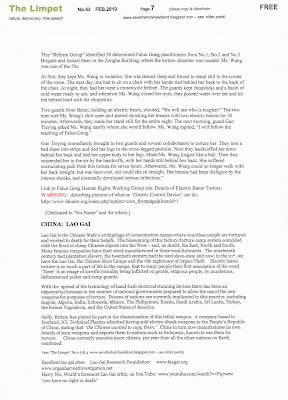 www.youtube.com/watch?v=Fq7wrw “you have no right to death” 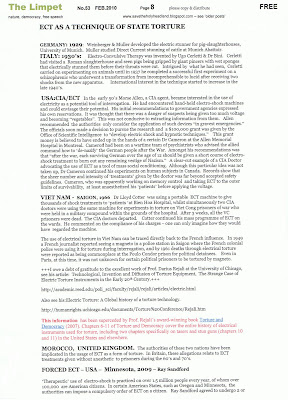 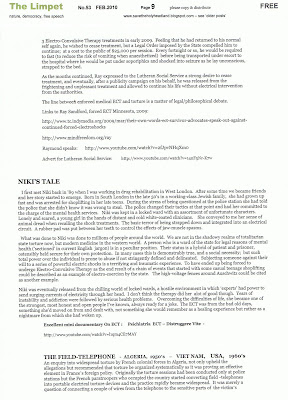 I owe a debt of gratitude to the excellent work of Prof. Darius Rejali at the University of Chicago, see his article: Technological, Invention and Diffusion of Torture Equipment, The Strange Case of Electric Torture Instruments in the Early 20th Century:
http://academic.reed.edu/poli_sci/faculty/rejali/rejali/articles/electric.html
Also see his:Electric Torture: A Global history of a torture technology :http://humanrights.uchicago.edu/documents/Torture%20Conference/Rejali.htm
This information has been superceded by Prof. Rejali´s award-winning book Torture and Democracy (2007). Chapters 6-11 of Torture and Democracy cover the entire history of electrical instruments used for torture, including two chapters specifically on tasers and stun guns (chapters 10 and 11) in the United States and elsewhere.
RAY SANDFORD – Enforced Electro-Convulsive Therapy, MINNESOTA, U.S.A., 2009:
http://www.tc.indymedia.org/2009/mar/their-own-words-ect-survivor-advocates-speak-out-against-continued-forced-electroshocks
http://www.mindfreedom.org/ray
You Tube advert for Lutheran Social Service Minnesota - This private company appears to have enormous influence over people’s lives in the USA… They profited $25,ooo for every ‘treatment’ imposed on Mr Sandford:
http://www.youtube.com/watch?v=14nF5Nr-K7w
Excellent mini documentary on ECT : Psichiatria ECT – Distruggere Vite: http://www.youtube.com/watch?v=l1qm4CE7MAY 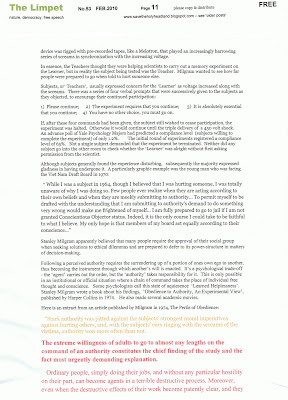 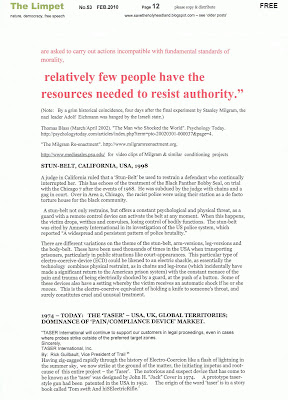 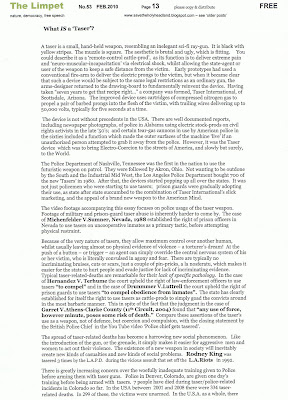 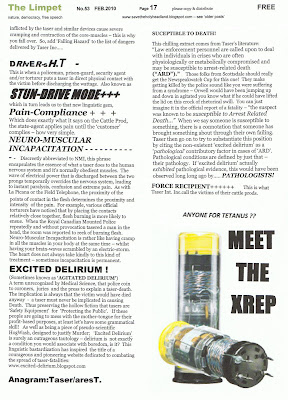 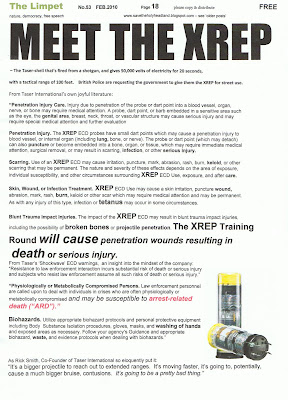 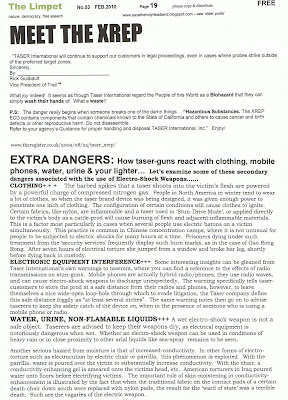 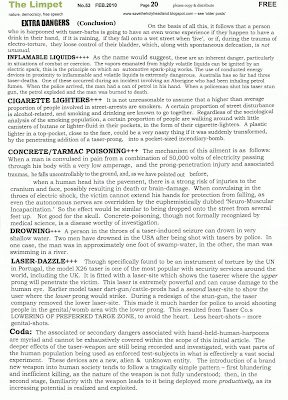 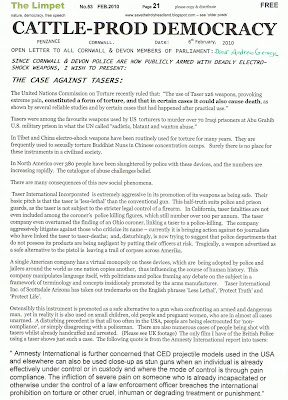 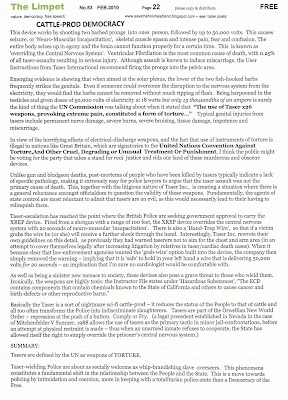 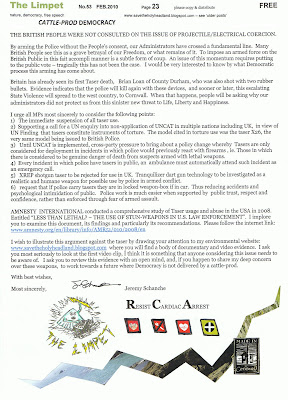 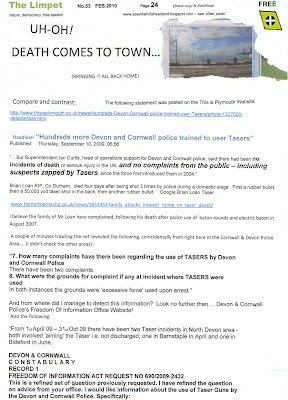 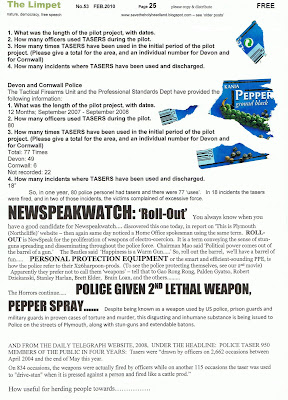 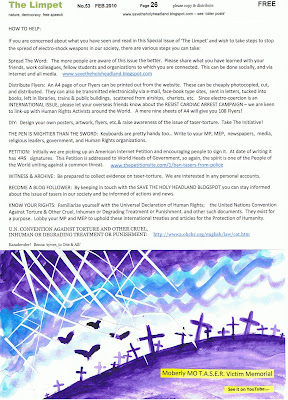 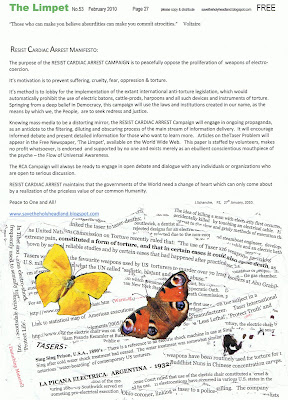 After publishing the Resist Cardiac Arrest blog-post back in February 2010, I spent a long time writing to my Member of Parliament at Westminster, trying to get him to take up the issues that I was presenting to him.  I informed him of the UN’s definition of taser as a weapon of torture and asked for his opinion of taser’s legality.  Andrew George MP, Liberal Democrat, would not respond properly or get involved in any way with this issue.
I eventually had a small victory when I got the British Government to admit that stun-guns are lethal weapons.  I’ll put a link to this below, plus some other articles relating to this.
I have always believed that the UN’s statement defining the taser x-26 as a weapon of torture automatically made the weapon illegal in any nation that had signed the UNCAT.  The problem is that the treaty, the law, is not being properly applied by signatory national governments.
When the police in my local area of Cornwall tortured a man with a taser, on film, I started a complaint process, which led me to Penzance police station.  Due to the lie I was told there, my complaint was not heard by the British police.  I was told that evidence derived from the internet was not admissible, therefore they would not look at my complaint.  This is obviously what we in Britain call ‘bullshit’, or a lie, as people have been imprisoned in this state for displaying artworks of burning poppies on ‘social media’, so obviously police monitor and prosecute people for ‘cyber-crime’.  It just does not apply when it’s a video on youtube of two fat cops torturing a little thin bloke in front of a large crowd of witnesses.  So anyway, having checked out British justice, I decided to go international and take it to Geneva.  The UN informed me that they couldn’t look into it because Britain never signed Article 22 of the UNCAT, that actually admits UN investigators into a signatory nation.  This little oversight occurred, surprisingly enough, under the Thatcher regime.
As the years went by, I got involved in other battles and slightly put the stun-gun issue aside.  However, earlier this year, I interviewed my new MP, the Conservative, Derek Thomas.  It’s an hour-long youtube video, covering various matters.  At one point I raised the UNCAT with him and he said he’d raise it with the British government.  Nothing happened for many months, but I recently started pressuring him again, and he’s now promised to respond soon…  I’ll certainly publish anything of interest he has to say about taser and UNCAT and why it has never been properly implemented in Great Britain.
I believe citizens of other countries should find out whether or not their governments are perpetrating the same fraud as the British government continues do to.  Find out if your politicians ever signed Article 22 of UNCAT and if not, challenge them.


We are humans, not cattle, and deserve to be treated with kindness and humanity, not prodded around and zapped by people with no understanding of international law.

Another case I have been very concerned about recently is that of Harold Hempstead, the ‘Caged Crusader’ of Florida and his courageous mission to expose the serious crimes of the Florida Department of Corrections, including the torture-murder of Darren Rainey, an emotionally disturbed black Muslim man who was killed in a special heat-chamber.  Please see my blog-posts on this, including an interview I conducted with Harold.  The world needs to hear this story.  Anyone wishing to take action on this could consider writing to Vanita Gupta at the Department of Justice in Washington D.C., Civil Rights Division, and ask her to take action on the several sworn affidavits exposing systematic human rights abuses in violation of the U.S. Constitution.  You could also consider contacting Amnesty International and asking them why they have not started a massive campaign to get justice for Darren Rainey, Harold Hempstead and all the inmates whose lives are in danger from the State of Florida.  The only reason they could give me was that they were rearranging their office.

When I’m not doing activism I do various artforms.  My art-paper is called The Caterpillar and comes out monthly.  It is also remixed into a Dub Version.  Recently I published my first ebook.  It’s an anthology of fiction and poetry.  The main item is the gothic surrealist novel, The Kramvil.  You can get it from almost all ebook distributors.  It’s called The Horned Whale or An Morvil Kornek by Jeremy Schanche.  ISBN: 9780993490910.

What I’m thinking right now is ‘don’t wait for leadership – figure out your own strategy and get on with it’.
Solidarity,  Jeremy Schanche, Kernow, Britain.

Posted by Save the Holy Headland at 14:21